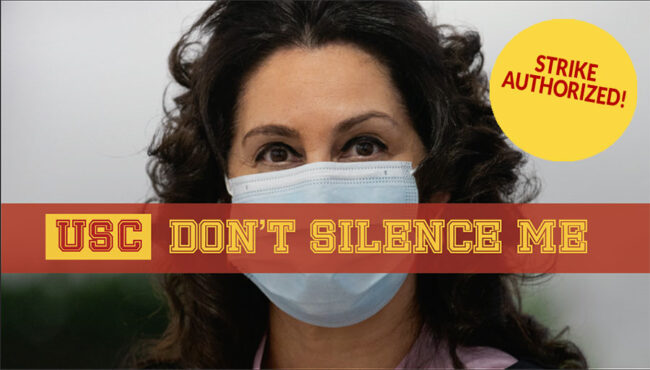 Approximately 96 percent of voters opted to authorize the strike in their fight to improve wages, protect their health and retirement benefits and preserve their right to inform the public about conditions inside their hospitals.

“USC has mistreated its caregivers during the pandemic,” said Patricia Barahona, a patient care technician. “We’ve put our lives on the line for our patients; meanwhile the university has cut our retirement benefits, made it harder for us to take sick leave, and refused to offer hazard pay to maintain staffing even during the worst days of the COVID-19 surge.”

During voting on Friday, workers were joined by several community allies including Assemblymembers Wendy Carrillo and Miguel Santiago. “There is no reason why a multibillion dollar hospital like (Keck) USC can not provide you with the basic necessities to do your job — the ability to be able to serve in dignity the patients who rely on you,” Carrillo told workers.

In November, the university cancelled its annual 5 percent (no employee-match required) contribution to employee’s retirement accounts, and has so far refused to restore the lost retirement funds.

At the bargaining table, USC is also:

Brian Dodero a respiratory therapist at Keck Hospital of USC, said the union wants USC to include a pandemic preparedness component in the new contract.

“This has been a once-in-lifetime pandemic that none of us ever expected and we want to make sure that what we have learned is included,”Brian Dodero, a respiratory therapist at Keck Hospital of USC told the Los Angeles Daily News.

The university is also seeking to eliminate the right of workers to hold pickets or public protests even to inform the public about patient care concerns for the duration of the contract.

Last year, caregivers protested outside Keck Hospital of USC against the university imposing rules that limited sick leave and imposed harsh penalties on workers who need more time to recover from illnesses or take care of their sick family members. That protest, which took place just one month before California’s first shelter-in-place order, would have been forbidden under the university’s current proposal.

“We can’t provide the care our patients deserve if we can’t inform the public of problems we see in our hospitals,” April Henriquez, a support coordinator at Keck Hospital of USC. “We don’t want to strike, but we’ve been through too much to let USC eliminate our benefits, put our safety at risk or prevent us from speaking out and advocating for our patients.”