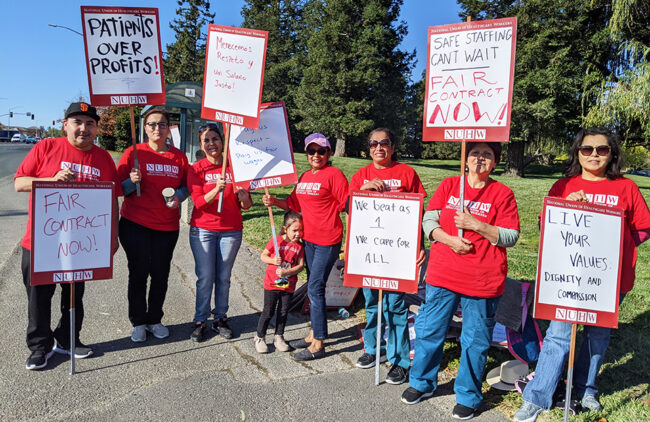 “We can’t provide quality patient care if we don’t have enough caregivers,” said Joy Layson, a nursing assistant at Queen of the Valley Medical Center in Napa. “And our hospitals won’t be able to recruit or retain quality workers if caregivers can’t make enough to help support our families.”

Over the past year, Providence has reported net revenues approaching $200 million from operating Queen of the Valley, Petaluma Valley Hospital, Santa Rosa Memorial Hospital as well as St. Joseph Eureka and Redwood Memorial hospitals in Humboldt County. Yet, it wants to slash health benefits for workers and reduce vacation days for senior staff, while limiting cost-of-living increases to no more than 2 percent a year.

Providence, based in Renton, Washington, is a notoriously anti-union employer. At Queen, the company spent two years wasting money on lawyers in an attempt to overturn the union election, and has since offered subpar contract proposals that would make Queen the lowest paid St. Joseph hospital in the region.

“The hospital could have avoided this; We’ve been asking for a contract for three years,” David Koch, and MRI technologist told the Napa Valley Register. “They’ve made this a continued fight and dragged out the negotiations.”

In retaliation for striking, Providence locked out many NUHW members, including large numbers of housekeepers, dietary workers, and respiratory therapists for four days. NUHW members held protests during the lockout calling attention to Providence’s punitive response to the strike and the impact on patients.

“A four-day lockout is an extreme act of retaliation that ultimately harms patients,” said Vincent Guevara, a pharmacy technician at St. Joseph Eureka. “We have blown the whistle on Providence St. Joseph siphoning millions of dollars from our communities while understaffing our hospitals, and now Providence executives are trying to silence us.”

In October, Attorney General Xavier Becerra blocked Providence St. Joseph from joining its Northern California hospitals with those of Adventist Health, finding that the partnership was not in the public interest because it had “the potential to increase health costs, and potentially limits access and availability of health care services.” Caregivers had urged Becerra to deny the partnership, noting that Providence over the last two years has fallen nearly $6 million short of its charity care obligation in Northern California required under its merger with St. Joseph Health.