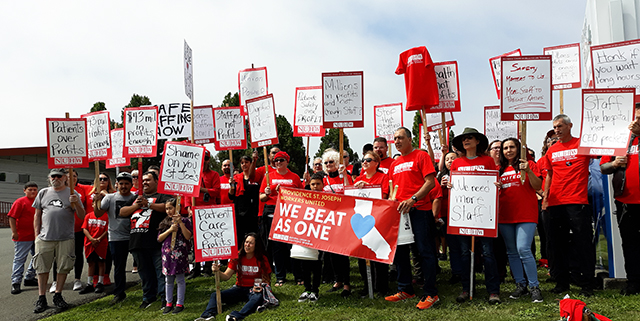 UPDATE: Workers at Providence’s Queen of the Valley Medical Center in Napa will hold an informational picket on Wednesday, April 28 to protest 11 proposed layoffs.

It turns out that relief would have been better served going to caregivers and patients who are now at risk of losing their jobs and critical health care services as Providence seeks to impose cuts despite finishing 2020 in the black.

Providence recently reported a $739 million net profit for 2020. Its cash reserves swelled to $15.3 billion, yet that’s apparently not enough for CEO Rod Hochman, and the leaders of Providence hospitals in Northern California.

Just as caregivers were finally receiving their vaccinations and emerging from a deadly COVID-19 surge that packed California hospitals, Providence started cutting dozens of jobs at its six Northern California hospitals, outsourcing departments and cutting services, including the birthing center at Redwood Memorial Hospital in California’s Humboldt County.

“Providence puts giant banners on our hospitals calling us ‘heroes,’ but they don’t respect us or the work that we do for our communities,” said Taylor Davison, an ER Registrar at Santa Rosa Memorial Hospital. “There is no excuse for this level of greed. We are still confronting the biggest public health crisis of our lifetime, and Providence is already throwing us and our patients under the bus while it aims for even higher profits this year.”

Since the start of 2021, Providence announced the following layoffs in Northern California:

In addition to laying off workers, Providence has moved to outsource 8 courier jobs at Santa Rosa Memorial Hospital and Queen of the Valley Medical Center, where Providence reported combined operating profits exceeding $114 million in 2019, the last year for which complete data is available.

In Humboldt County, where Providence has an effective monopoly on acute care hospitals, the company announced that it will eliminate the obstetrics unit at Redwood Memorial Hospital, in Fortuna on July 1 — the first day it’s permitted to do so under a 2015 agreement with then California Attorney General Kamala Harris that was mean to safeguard services in the wake of Providence’s merger with St. Joseph Health.

The closure would force nearby residents to drive an additional 30 to 45 minutes to the nearest birthing center, a delay that hospital nurses warned jeopardizes the health and safety of both mother and baby.

“By failing to support mother-and baby services in our community, Providence is seeking to justify its desire to consolidate services at St. Joseph Hospital in Eureka, a goal which suits their bottom line and desire for profits, but fails our families,” said Leslie Ester, a registered nurse who has served as negotiator on behalf of nurses at St. Joseph Eureka and Redwood Memorial.

Providence is cutting services in Northern California despite reporting sizable profits in the region. In 2019, the most recent year for which complete data is available, St. Joseph Eureka reported a $19.6 million profit and Redwood Memorial Hospital reported a profit of $11.8 million.

While Providence last year repeatedly failed to provide workers with appropriate PPE resulting in COVID-19 outbreaks that required its hospitals to seek staffing help from the U.S. National Guard, The New York Times reported that it has continued pumping money into hedge funds, private equity firms and real estate ventures.

It also oversees two venture capital funds that manage about $300 million on behalf of the health care chain. The venture funds do deals alongside some of the country’s highest-profile investment firms, including Kleiner Perkins and Carlyle.

Last year, Providence’s portfolio of investments generated about $1.3 billion in profits, far exceeding the profits from its hospital operations. Like other nonprofits, Providence generally does not owe federal taxes on its earnings.