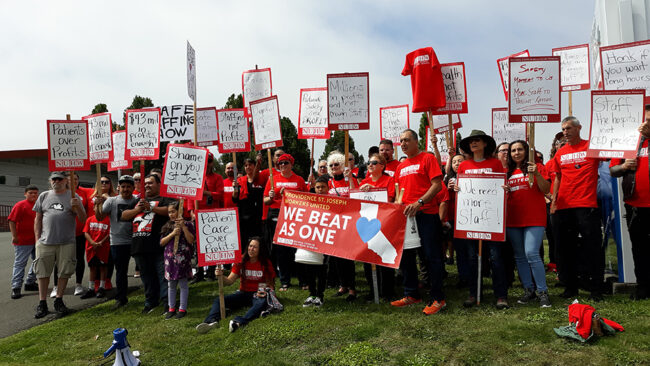 Hospital workers went strike Wednesday, November 20, against Providence St. Joseph hospitals in Northern California, demanding contracts that ensure safe staffing and require the health care giant to invest its massive profits into its workforce and the communities it serves.

Demanding that the health care giant invests its earnings back into the communities it serves and settles fair contracts without takeaways, striking workers, including nursing assistants, medical technicians and housekeepers, walked picket lines at Petaluma Valley Hospital, Queen of the Valley Medical Center in Napa, St. Joseph Eureka and Redwood Memorial Hospitals in Humboldt County. Workers at Santa Rosa Memorial Hospital held an informational picket in support of the strike today.

In retaliation for the one-day strike, Providence St. Joseph has cancelled contract bargaining sessions and is locking out striking workers for four days following the strike, leaving patients under the care of temporary workers until Monday, November 25.

“Locking us out of our jobs for four days is an extreme act of retaliation that ultimately harms patients,” said Patti Barnett, a radiological technologist at Petaluma Valley Hospital, where the discovery of mold earlier this year forced the temporary closure of the labor and delivery unit. “This building is literally falling down around us,” she added.

“We have blown the whistle on Providence St. Joseph siphoning millions of dollars from our communities while understaffing our hospitals,” said Vincent Guevara, a pharmacy technician at St. Joseph Eureka, “and now Providence executives are trying to silence us.”

Over the past year, those five Northern California hospitals have netted more than $197 million in operating profits, yet the company is seeking to cut health benefits and reduce vacation time, while offering only 2 percent annual raises that do not keep up with rising costs. Caregivers also report that their facilities are severely understaffed following layoffs at several hospitals in recent years and resignations from workers taking jobs at better paying hospitals.

In a union survey earlier this year, 92 percent of bedside caregivers at Providence St. Joseph hospitals throughout Northern California reported that their shifts are understaffed at least once a week. Nursing assistants reported having to care for as many as 20 patients at a time.

“We can’t provide quality patient care if we don’t have enough caregivers,” said Joy Layson, a nursing assistant at Queen of the Valley. “And our hospitals won’t be able to recruit or retain quality workers if caregivers can’t make enough to help support our families.”

In October, Attorney General Xavier Becerra blocked Providence St. Joseph from joining its Northern California hospitals those of Adventist Health, finding that the partnership was not in the public interest because it had “the potential to increase health costs, and potentially limits access and availability of health care services.” Caregivers had urged Becerra to deny the partnership, noting that Providence over the last two years has fallen nearly $6 million short of its charity care obligation in Northern California required under its merger with St. Joseph Health.

“Providence trying to retaliate against caregivers for blowing the whistle on its greed, but we’re going to keep fighting until this company values its workers and patients as much as its profits,” said Sal Rosselli, president of the National Union of Healthcare Workers, which represents the caregivers.