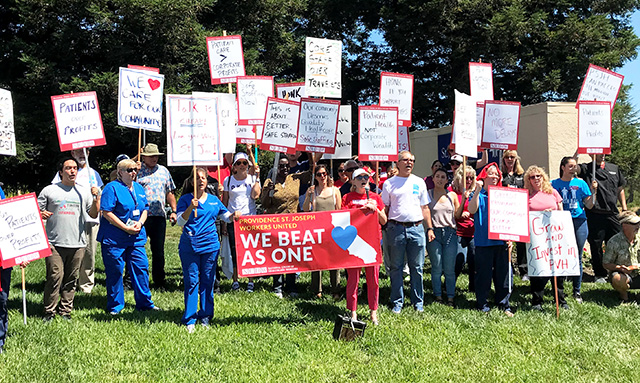 Workers at Queen of the Valley Medical Center have nearly unanimously approved a first contract that will provide substantial raises and help the Napa hospital retain highly-qualified caregivers as the Bay Area continues to confront the COVID-19 pandemic.

The contract will boost salaries between 14 and 24 percent over four years for approximately 460 employees, including nursing assistants, respiratory therapists, medical technicians and housekeepers, who voted to join the National Union of Healtcare Workers in 2016, only to have the hospital try to overturn the election. Several workers will get even larger raises as the hospital puts in place a first ever wage scale establishing base salaries for their positions.

“We fought years for this contract, and it was worth it,” said Ray Herrera, a senior radiologic technologist. “This contract will help our hospital retain quality workers, and it will help us to support ourselves and our families.”

In addition to increased wages, workers will receive:

Queen of the Valley workers voted to join NUHW in November of 2016. However, the hospital abruptly withdrew recognition of the union four months later, claiming that the National Labor Relations Board somehow disenfranchised workers by conducting the election through the mail, even though turnout was 90 percent, and workers elected to form a union by a 20-point margin.

The hospital refused to negotiate, while losing several court rulings trying to overturn the union election. Finally, in 2018, a three-judge panel of the Ninth Circuit Court of Appeals ordered the hospital to resume bargaining and recognize the union.

Last November, Queen of the Valley workers held their first-ever strike. At the time, the hospital was offering less than 2 percent annual wage increases and demanding that workers immediately give up their PPO health plan that allows them to see the doctors of their choice.

“This contract is a testament to our determination and solidarity,” said Joy Layson, a nursing assistant. “We showed Queen management that we will stand and fight for each other and for our patients. I’ve never been prouder to work with my colleagues at the Queen.”