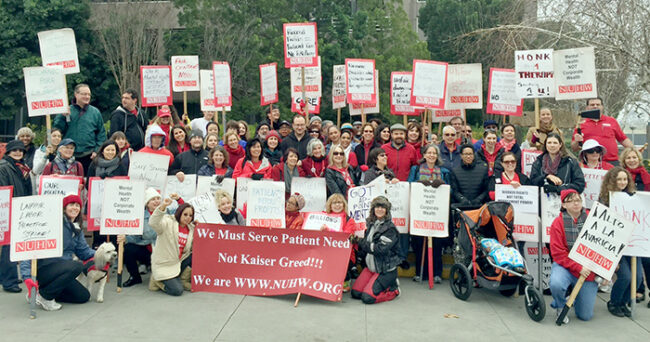 Four Thousand Caregivers to Protest over the Quality of Mental Health Care. Strike will Affect more than 100 Kaiser Clinics and Medical Facilities

Emeryville – The National Union of Healthcare Workers (NUHW) filed notice with state authorities today that mental health clinicians represented by the union will hold a strike at Kaiser Permanente facilities across California Dec. 10 to 14.  The strike was sparked by the nation’s largest non-profit HMO’s failure to live up to its promises to fix ongoing understaffing issues that force patients to wait a month or more for mental health therapy appointments.

Four thousand Kaiser psychologists, therapists, social workers, psychiatric nurses and addiction medicine specialists — along with other medical professionals — will stage pickets outside dozens of Kaiser facilities from San Diego to Sacramento during the week-long walkout.

“Many of the issues that have plagued Kaiser for years have not gone away,” said Kelly Magee O’Dea, a Kaiser licensed clinical social worker. “The wait times for appointments are far too long, and the end result for too many people is that they either get sicker or they drop out of treatment frustrated because they cannot get the care they need.”

For nearly a decade, through concerted union activity, legal efforts and collective bargaining, clinicians have been seeking improvements in mental health care services at Kaiser. Clinicians want more authority to apply their professional judgement to how often they see their patients and whether individual or group therapy is indicated.

NUHW members filed the complaint that led to the initial state investigation and ensuing $4 million fine. Since 2015, the union and its members have been committed to working with Kaiser managers to improve care, but the HMO has refused to make meaningful changes to working conditions or access to care.

Kaiser’s ratio of mental health clinicians to Kaiser members has remained essentially unchanged since 2015 (approximately one full-time equivalent clinician for every 3,000 Kaiser members in California). Since contract bargaining began in June, Kaiser has rejected clinicians’ proposals to boost staffing to end long waits for therapy appointments.

“Our patients are still struggling to access the care they need,” said Emily Schwartz, a Kaiser therapist. “If Kaiser is serious about improving access, it has to work constructively with clinicians and put more resources into solving the problem.”

This week Kaiser reported a $2.9 billion profit over the first nine months of 2018 after reporting a $3.8 billion profit for 2017. Kaiser has nonprofit status, but holds $42 billion in cash and investments. It pays its top managers salaries in the millions of dollars with multiple pensions and other lucrative benefits.

“Kaiser clearly has the resources to be a mental health care leader; instead it’s a violator of mental health access rules,” said NUHW President Sal Rosselli, “We remain ready to work with Kaiser to fix its mental health system, but it’s time for Kaiser to use its vast resources to make meaningful improvements for patients. Walking a picket line for five days is a small sacrifice compared to our patients’ burden of waiting weeks for care that they paid for, at times desperately need, and have every right to receive.”