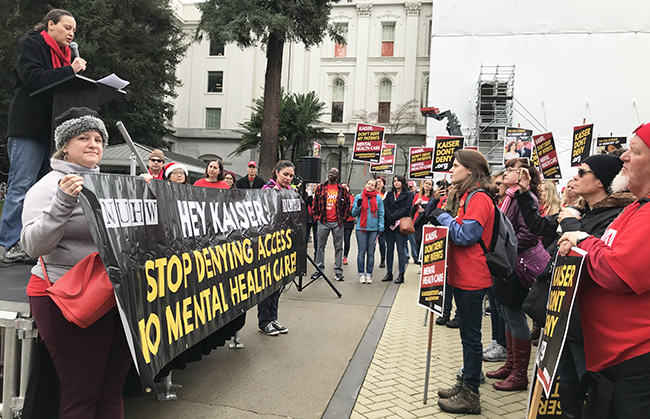 Kaiser psychologists, therapists, social workers and other healthcare professionals from across Northern California and the Central Valley will converge on Sacramento Thursday for two rallies and a march on the Department of Managed Health Care, which is responsible for overseeing compliance with California’s Mental Health Parity Act.

“We’re doing everything we can as therapists to hold Kaiser accountable,” said Michael Torres, a Kaiser psychologist. “Now we’re coming to Sacramento to call on state regulators to do their jobs and demand that Kaiser follow the law by providing the same access to mental health care as it does for all its other services.”

Kaiser mental health clinicians will begin arriving in Sacramento around 9:30 a.m., and will hold a rally at 10th and L streets outside the Capitol Building at 10:30 a.m. They will then march to the Department of Managed Health Care offices at 990 9th St. for second rally at 11:30 a.m.

In Southern California, clinicians will picket from 9 a.m. to 2p.m. at the following two locations:

The Department of Managed Health Care has come under increasing scrutiny for its oversight of California mental health parity laws, as documented by recent articles in CalMatters and Los Angeles Times.

On Tuesday, the agency’s director, Shelley Rouillard announced that it is “monitoring access to behavioral health services” for Kaiser patients, and that Kaiser must continue to comply with “timely standards and requirements during any labor strike.” She also encouraged Kaiser patients whose appointments may have been inappropriately rescheduled this week to contact the agency’s help line at 888-466-2219 or www.HealthHelp.ca.gov.

“I’m happy to see that the Department of Managed Health Care appears to finally be taking some first steps toward fulfilling its responsibility to protect Kaiser patients,” NUHW President Sal Rosselli said. “Kaiser has caused this strike by negotiating in bad faith, and we urge patients to contact the DMHC if their appointments have been cancelled.”

The state agency ordered Kaiser in 2017 to accept outside monitoring of its mental health services following multiple violations of the California Mental Health Parity Act. However, it has refused to release the monitor’s reports tracking whether Kaiser has improved access to mental health care.

In a survey conducted earlier this year, 77% of Kaiser’s clinicians reported that on a daily basis, they must schedule their patients’ return appointments further into the future than is clinically appropriate. Nearly three-quarters reported that appointment wait times for their patients have grown worse during the past two years.

Kaiser clinicians, who have been working without a contract for over a year, held a five-day statewide strike last December. Since that strike, Kaiser has unlawfully demanded that clinicians drop unfair labor practice complaints as part of a settlement proposal and retaliated against clinicians by threatening to withdraw a retroactive cost-of-living wage increase after clinicians rejected a settlement proposal that did not go far enough to improve access to care.

Both sides have tentatively agreed to commence a collaborative process to reinvent Kaiser’s mental health system. But given Kaiser’s failure to follow through on previous collaborative efforts, clinicians want safeguards for improved patient care to be written into the contract. These include: