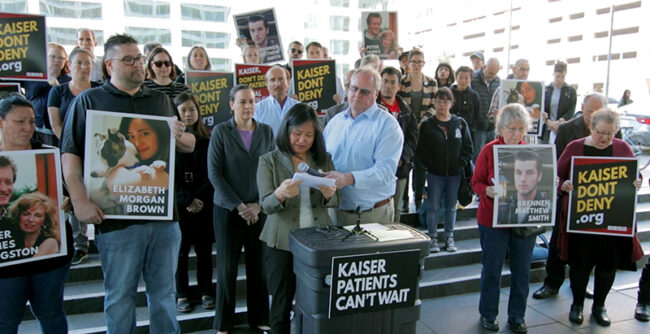 For all its talk about launching a mental health revolution, Kaiser Permanente showed its true colors recently when it locked its own members out of its corporate offices in Oakland.

On April 17, Kaiser patients, clinicians, and community leaders came together with the goal of helping the HMO truly become a national model for mental health care. But when several patients and their family members tried to enter the building in hopes of scheduling a meeting with CEO Bernard Tyson, Kaiser officials locked the doors.

Can you imagine a more symbolic action by Kaiser?

After years of denying patients access to mental health care — forcing them to wait months for therapy in violation of state law — Kaiser literally locked out patients who were trying to ensure that everyone got better access to care.

Only after the gathering – and news reports about it on local radio stations and the San Francisco Chronicle — did Tyson finally agree to meet with the patients. Under pressure, Kaiser even flew one patient in from Washington State for the meeting that occurred on Thursday, April. 25.

Seong Brown, whose teenage daughter, Elizabeth, died by suicide after struggling to get care from Kaiser, said they shouldn’t have had to shame Tyson to get his attention. “Trying to get a meeting with Bernard Tyson has been no different than trying to get mental health care for my daughter,” she said. “We had to fight Kaiser every step of the way, and they still denied her the care she needed.”

The patients reported having a long discussion with Tyson and other executives. They made clear they wanted to remain engaged and that Kaiser needed to work with its clinicians to improve access to mental health care.

The gathering outside Kaiser headquarters clearly unnerved Kaiser officials. Several patients, clinicians, and local officials all talked about their struggles with Kaiser. Kevin and Julie Dickens spoke about Kaiser denying Kevin mental health therapy for over two months, during which time he attempted to take his own life. And Susan Runyan recalled how Kaiser treated her cancer, but refused to provide one-on-one mental health therapy when she contemplated suicide. “The lack of parity is astounding and disturbing,” she said.

Dickens said that Tyson had no excuses not to fix Kaiser’s broken mental health care system. And if he doesn’t make immediate improvements, Dickens suggested that it’s time for Kaiser to find a new CEO.

“Prove to us that you really, truly want to make a change,” Dickens said during the gathering. “If you can’t do it, step away. Get somebody else in here who can, because that’s what we need.”