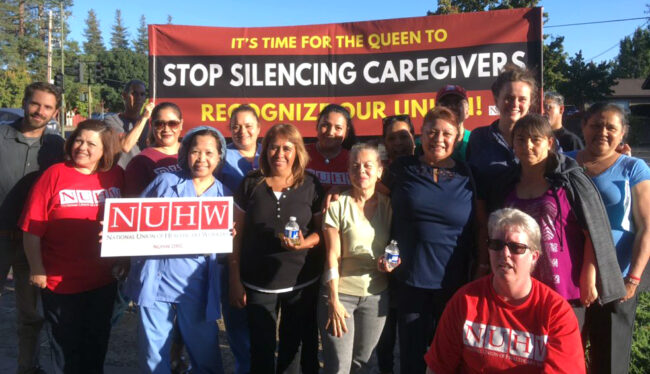 Op-ed: It’s time for Queen of the Valley to honor its workers’ right to unionize

Napa residents are fortunate to have Queen of the Valley Medical Center, home to some of the nation’s finest doctors, nurses and hospital workers.

We ask Queen to deliver our babies, care for our elders and come through for us in emergencies. Now it’s time to ask something else of Queen: to honor the vote of its workers to form a union.

As Chairman of the Napa County Democratic Central Committee, I represent a party that believes all people should have access to healthcare and that care improves when healthcare workers are organized and can use their collective voice to advocate for patients.

That’s why I am disappointed by Queen CEO Larry Coomes’ response to his caregivers voting overwhelmingly to join the National Union of Healthcare Workers in November of 2016. Instead of bargaining with his employees, he’s hired lawyers who are still seeking to overturn the election. Coomes has been quoted saying that he is refusing to abide by orders issued by a federal judge and the National Labor Relations Board because he thinks more caregivers would have been able to vote if the election had taken place inside the hospital rather than through the mail.

The Queen’s refusal to honor the results of a vote-by-mail election has not gone unnoticed by my fellow Democrats. At our state convention last May, the party’s Labor Caucus passed a resolution condemning the Queen’s corporate parent, Providence St. Joseph Health, for its “anti-worker behavior” and calling upon it to honor the election results.

At that time, the labor board had already certified the results and rejected two appeals from Queen seeking to overturn them. Since then, a federal administrative law judge ruled that Queen had illegally rescinded recognition of the union, refused to bargain in good faith and retaliated against several workers for their union activities.

The judge ordered the Queen to quickly resume bargaining and reverse the retaliatory acts, but Coomes has decided to appeal the ruling.

His oft-stated solution is to make caregivers vote again. That’s not how our democracy works, and that’s not how our hospital should conduct itself. We don’t get to redo elections just because we don’t like the results. Imagine if President Trump lost his re-election bid only to refuse to leave office. We’d face a constitutional crisis. We are facing a different kind of crisis at the Queen – a crisis of trust.

At some point, our lives may depend on the care we receive at the Queen. When you depend so much on an institution, you want to believe that its leaders share your basic values — that they believe in democracy, open dialog, and the rights of workers to join together to improve their lives and the lives of their patients.

It’s time our hospital once again reflected the values of our community.

This shouldn’t be a hard decision for Coomes. It’s time for him to respect democracy; his employees; the orders of multiple judges; and the great tradition of our hospital. It’s time to drop the appeals and recognize the union.