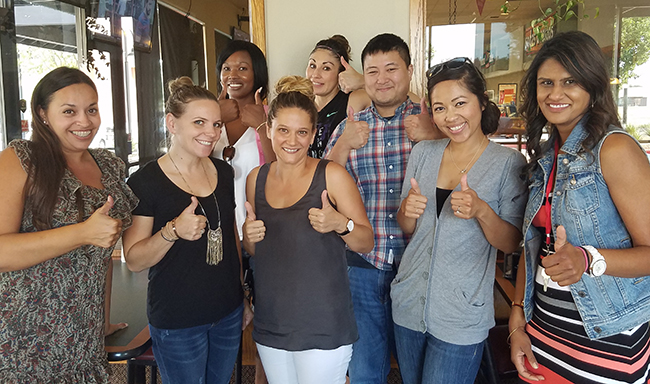 NUHW kept growing in 2017. After numerous organizing victories, we surged to more than 14,000 members, while further cementing ourselves as the leading union for mental health clinicians.

Our first victory of the year came in January at UCSF Benioff Children’s Hospital Oakland where 250 professionals — more than half of whom are psychologists, therapists and social workers — joined hundreds of their colleagues in becoming NUHW members.

We also organized dozens of additional workers at Keck Medicine of USC, putting us over 1,000 members at one of Southern California’s preeminent medical systems.

And workers at Kindred Hospital San Diego voted 87-2 to become NUHW members. Workers at the non-acute hospital reported having gone years without raises and routinely showing up to work to find that their shifts had been cancelled.

“This is a sector of the healthcare industry that gets little attention, but impacts thousands of lives,” NUHW President Sal Rosselli said. “By organizing Kindred San Diego and similar facilities, we are leading the fight for a more just healthcare system that provides all workers with good pay and all patients with the care they deserve.”

NUHW also had a lot of organizing success along the Central Coast in 2017. We organized 50 workers including treatment technicians, custodians, cooks and office assistants, at Janus of Santa Cruz, a nonprofit drug treatment center.

At Dominican, workers told the Santa Cruz Sentinel the hospital had begun outsourcing their jobs and several veteran physical and occupational therapists had been forced to reapply for jobs they had held for years.

“People in our group wanted to have a louder voice for our patients and ourselves,” said Annie Stepka, an occupational therapist who has worked for Dominican for 10 years told the paper.

“One thing I worry about — with the increasing corporatization of the healthcare industry where some hospitals are purchased as investment opportunities — is that companies that look at the bottom line will not see a value in utilizing therapy. I was in favor of unionizing so that people who actually work on the front lines, and along the cracks of our social safety nets, have more power in advocating for patients in this time of shift and uncertainty in the healthcare industry.”

We closed out the year in much the same way we started: increasing the ranks of organized mental health workers. We organized 120 mental clinicians at Richmond Area Multi-Services in San Francisco and 40 clinicians who work at the Elk Grove Unified School District.

And we look forward to many more victories in 2018.