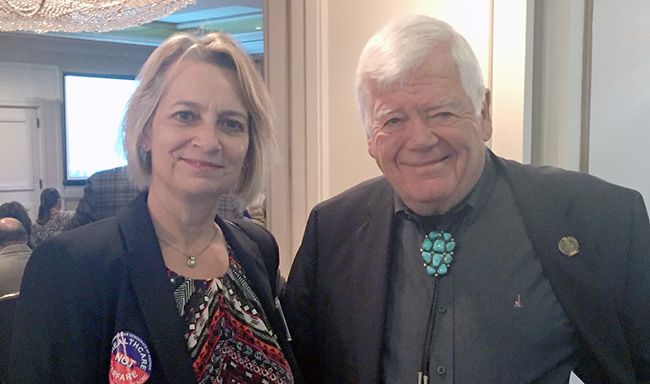 NUHW stewards advocate for Medicare for All, single-payer health care

NUHW steward councils throughout the state are holding discussions about the kind of change we want for the broken U.S. health care system.

One of the reasons NUHW has endorsed Bernie Sanders for president is his long-time advocacy of a publicly funded Medicare for All, single-payer healthcare system that would eliminate the profit-driven insurance companies with one “payer.” The federal government would cover everyone.

Workers and families would save thousands of dollars every year, compared to what we pay now for premiums, deductible, co-pays, and other charges. All of these expenses — which average over $10,000 a year for many families — will be replaced by a small payroll tax amounting to 2.2 percent of household income, deducted from your paycheck. Employers will also have much lower costs. The huge savings of the new system will make it possible for everyone to be covered for high-quality health benefits.

Unions would no longer need to negotiate health benefits with our employers. This could lead to higher wages and new benefits.

Kaiser Psych–Social steward and NUHW Executive Board member Elizabeth White (pictured above with U.S. Congressman Jim McDermott of Washington state at a single-payer conference last fall in Chicago) is active in Labor United for Universal Health Care in the Los Angeles area and is helping to lead steward council discussions.

At California Pacific Medical Center in San Francisco, Porfirio Quintano, also a steward and Executive Board member, explained that the United States is the only country in the world where health care is a profit-making industry rather than a public service. The result is poor health for many Americans.

For health care workers, our battles over staffing with hospitals and other facilities could be transformed under the new system, because the bosses would not have sole control over facility budgets anymore. Health facility budgets would be negotiated with and decided by a public agency that would have to listen to unions and community advocates of better services.

In California, the movement for Medicare for All, single-payer health care is working to win a statewide system change in 2020. If you want to get involved in our union’s work to change health care, contact NUHW Community Liaison Marilyn Albert, RN, in the Emeryville office.