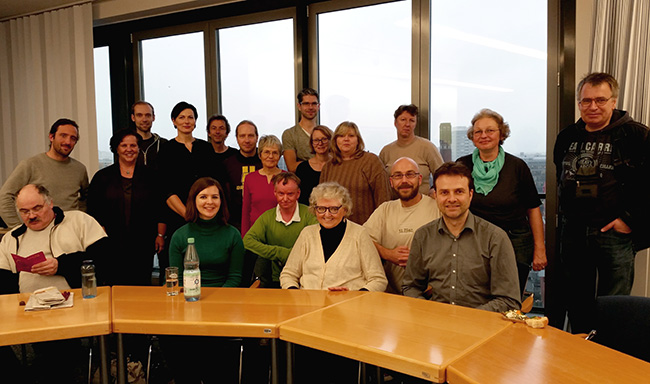 It is a tribute to NUHW’s history and principles that we were invited, for a second time, to join German health workers in a conference in Berlin that brought together hospital workers, home care workers from different European countries, political activists, and elected officials from the most progressive political party in Germany.

Elected members of the German parliament who belong to that party —  called Die Linke, or The Left Party — have been working closely with unionized health workers to launch a campaign to improve hospital staffing levels and to reverse the privatization of the health care system which is making it more like the worst aspects of the U.S. system.

These workers, including those in occupations other than nursing, wanted to learn about the California nurse-to-patient ratio law, as well as other means of fighting for safe staffing. The nurse staffing levels in German hospitals appear to be quite bad. Though I believe the acuity levels of the patients are somewhat lower, nurses are caring for ten to fourteen patients on the day shift and as many as twenty-five patients on the night shift.  By contrast, the California ratio law requires that one RN care for no more than five patients.

These staffing levels have worsened dramatically in the past 12 years since the German health system started to undergo a relentless drive for profits. The workers particularly hate the Diagnosis-Related Group (DRG) system, which is newer to them than it is to us in the United States. The DRG system caused a sharp reduction in hospital staffing levels in recent years.  Although in Germany everyone gets health insurance from the state and the overall cost of health care is much lower than in the United States, the profiteers have moved in and the workers and patients are suffering. The labor law in Germany does not seem too good — for example, workers in religiously affiliated hospitals do not have the right to unionize!

After speaking at this three-day conference (as an RN, I worked for five years in other states to win a ratio law, and spoke about why I believe that effort has not succeeded yet outside of California), I was asked to meet with hospital workers in Berlin and Hamburg. In Berlin I was welcomed at the headquarters of the large service workers union Ver.di (United Service Workers) to which the workers belong. In Hamburg, I met with the workers in a local political activity center, and they were joined by their City Council representative from the Left Party, as well as  a health policy expert who works in the European Parliament, which is like Congress, but for all the European countries together.

Copies of NUHW supporter Suzanne Gordon’s indispensable book on the international ratio movement were shared with the workers for them to refer to in their struggle.  I also was able to share information about NUHW’s campaign for mental health staffing. The activists found our Kaiser campaign particularly interesting in terms of the research and communications work we have done around Kaiser.

Berlin workers at a huge hospital called Charite have conducted a militant struggle and have struck over the staffing problem. The Hamburg workers are working to unite after a for-profit company bought up five of the hospitals in the city.

When we meet health workers from other countries we learn how much we have in common. For example, the name Sodexo came up at this conference as an adversary of German workers.  Our NUHW traditions of workplace militancy — marches on the boss, for example — were of great interest to the German workers.

Soon the German hospital workers will escalate their struggle and we will be able to stay in touch with them and learn from their experience.