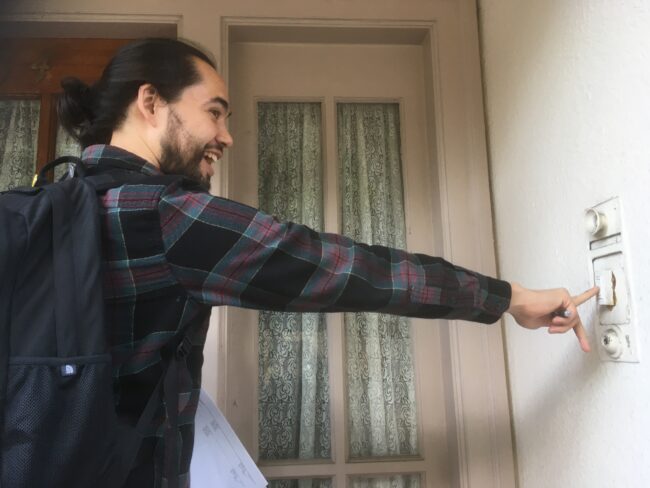 As a social worker, Martha Rea is no stranger to knocking on a stranger’s door and striking up a conversation. But even she was a little nervous pounding the pavement for Mark Leno, who NUHW has endorsed for mayor of San Francisco.

“What inspired me was that Mark has been supportive of our union’s efforts both in San Francisco and Oakland,” said Rea, who works at UCSF Children’s Hospital Oakland and traveled all the way from her home in Vallejo on a Saturday to knock on doors in San Francisco.

Rea isn’t NUHW’s only star volunteer. Dozens of members — including more than two dozen of Rea’s Oakland co-workers —have worked the phones and knocked on doors over the past month to help elect Leno in San Francisco and defeat a recall election in Orange County against State Sen. Josh Newman.

In San Francisco’s ranked-choice voting election, NUHW volunteers are urging residents to cast their second-place votes Supervisor Jane Kim, who has also been a staunch ally of our union and a champion for workers’ rights.

In Orange County, the recall bid has been orchestrated by corporate interests seeking to keep pro-worker politicians from maintaining the two-thirds legislative majority needed to pass key legislation.

Brandy Brent, an audiologist for Kaiser Permanente in Woodland Hills, said she decided to call voters on behalf of Newman in part to help her learn more about how politics impacts her job.

“It’s given me a broader view than just what needs to be done in our department and at Kaiser,” she said. “Now I have a better understanding of why we do what we do (as a union).”

While many volunteers aren’t experts on local and state issues, they said they were often able to connect with voters simply by saying that they are healthcare workers. “It’s kind of like saying you’re a teacher,” said Kirstin Quinn Siegel, a mental health therapist at Kaiser in Richmond. “It gives you credibility.”

Brent said that when voters asked her questions, she found it was most effective to say that Newman had supported healthcare workers, so she was taking the time to help Newman. “That seemed to give people extra reassurance,” she said.

Not everyone is easily swayed. Bryce Bridge, a therapist with Richmond Area Multi-Services in San Francisco, encountered one voter who told him that homeless people should leave the city and go somewhere cheaper to live.

“I didn’t really know what to say,” said Bridge who has several clients who are homeless. “The moment that we only give a damn about ourselves and our own problems, that’s the moment San Francisco ceases to be by the people and for the people.”

Volunteering isn’t easy, but Rea said she plans to keep doing it. “San Francisco is not my city, but I want to make a positive impact on politics,” she said. “It felt just as gratifying as being a social worker, and I definitely have a deeper appreciation for the folks who come knocking at my door.”