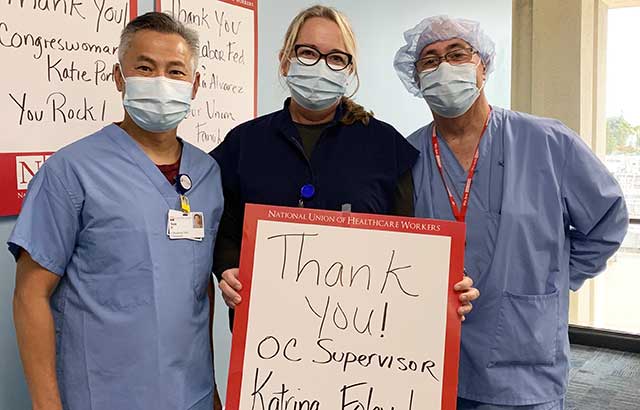 The settlement was covered by the Orange County Register, Los Angeles Times, and Becker’s Hospital Review.

The contract for the more than 610 Fountain Valley workers will boost salaries by an average of 15 percent in the first year, with additional raises in the final two years. It also includes additional pay for working late shifts as well as a new health plan that will lower premium costs by thousands of dollars per year.

“This contract shows what we can achieve as caregivers when we stay united and fight for our patients,” said Ron Rosano, a surgical technician. “We’re proud of the raises we’ve earned and the provisions we won that will protect the health and safety of patients and ourselves.”

The contract also enshrines pandemic safety protocols at Fountain Valley, which was cited last year by the California Department of Public Health for violating state safety guidelines after NUHW filed a complaint. The new contract includes provisions requiring that the hospital maintain a three-month supply of PPE and notify workers when a patient they are in contact with is suspected of having a highly-infectious disease. The contract also requires that the hospital pay for any missed shifts during a quarantine period for up to 14 days.

The contracts for subcontracted housekeepers and food service workers at all three hospitals set a minimum hourly salary of $18.20, which is the same minimum salary for non-subcontracted workers at the three hospitals. As a result, most of the subcontracted workers, who previously did not have a salary floor, will receive immediate raises ranging from 17 to 30 percent. The workers will also get additional 3 percent raises in the second and third years of the contract.

“After a brutal last 18 months, this contract is a huge victory,” said Johnenfer Larry, a housekeeper at Lakewood Medical Center. “We won respect for the work we do and big pay increases that will make a big difference in our lives.”

The contract was ratified with 97 percent of workers voting in favor.