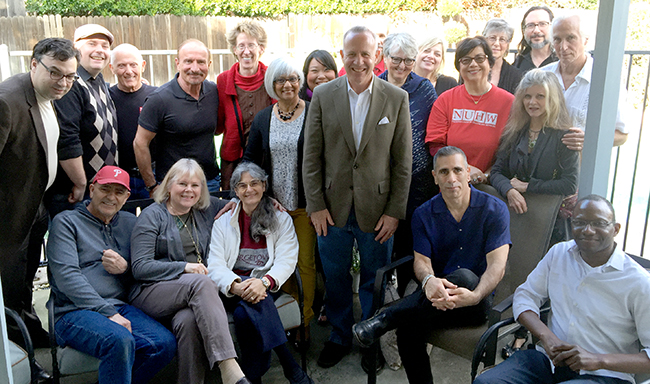 NUHW members raised more than $1000 for Darrell Steinberg’s campaign for mayor of Sacramento at an event held February 20.

Steinberg, the former President pro Tem of the state Senate, is one of California’s strongest public advocates for better mental healthcare and has a long history of championing policy issues affecting behavioral health at the local, state, and federal levels of government.

NUHW is partnering with the Steinberg Institute, which Darrell founded in 2014 to advance behavioral health policy and leadership, and endorses his candidacy for mayor of Sacramento based on decades of exemplary service and his commitment to issues that concern healthcare workers and their patients.

If you would like to make a donation to Steinberg’s campaign, make your check out to Darrell Steinberg For Mayor and send it c/o NUHW, 5801 Christie Ave., Suite 525, Emeryville, CA 94608. Any amount is appreciated. If you’d like to become a regular contributor, click here to download a Steinberg for Mayor contribution form.

Steinberg was instrumental in writing and passing the California Mental Health Services Act to help get people off the streets and into healthcare. Steinberg also united the legislature in prioritizing mental health services, including housing, for the first time in state history.

Steinberg also serves as the Director of Policy and Advocacy for the Behavioral Health Center of Excellence at UC Davis, Department of Psychiatry and Behavioral Sciences, School of Medicine providing consultation and advice related to its goals and initiatives, and meeting with community, university and state leaders to advocate for mental-health programs.

Steinberg became passionate about mental health during his time on the Sacramento City Council. In 1997, former Mayor Joe Serna and then Councilmember Steinberg were the only two members to vote against the city’s lawsuit against Loaves & Fishes, a private charity providing food to the homeless. The free lunches drew thousands of homeless people who were seen as a nuisance to local businesses near the shelter. Upon further investigation into the rapidly increasing homeless population, Steinberg learned that an overwhelming portion of homeless suffered from mental illness and did not have access to proper mental health care.

From this point forward, Steinberg has worked to bring awareness and solutions for what he calls “the under-attended issue of our time and in our society.” Steinberg’s commitment to improving mental health services over the years has served to provide integrated services to the homeless; increase funding of “whatever-it takes” services for individuals with the most severe mental illnesses via Prop 63 in 2004, known as the California Mental Health Services Act: fund a major statewide expansion of crisis residential and stabilization beds and mobile crisis capacity reducing recidivism by prioritizing mental health assistance to those in crisis; and, now by establishing a first of its kind statewide organization that will support and encourage legislative champions; help solve disputes between mental health stakeholders; evaluate impacts of current investments; and, implement a tangible vision to advance mental health services and support.