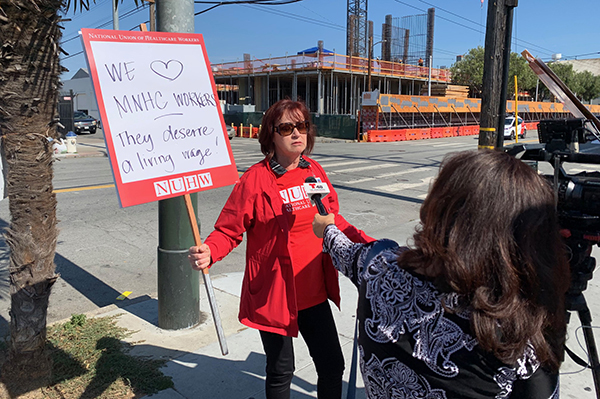 Mission Neighborhood Health Center serves a vital role providing affordable health care to many Spanish-speaking immigrants in San Francisco. But the center is turning its back on its own caregivers, refusing to pay them a sustainable wage even as the center reports having more than $7 million in reserves and paying top executives more than $200,000 per year.

In response, caregivers at the center held an informational picket on Oct. 15 that was covered by Telemundo and Mission Local.

“I’m proud to work at a clinic that helps so many people, but I wish the people who run our clinic would help us afford to keep living in the Bay Area,” said Ebony Campos, a medical assistant.”

The clinic has offered caregivers a 2 percent raise — a portion of which would be lost to higher health care premiums. Many workers at the clinic make only slightly above San Francisco’s $16.50 living wage standard. Several medical assistants, who perform health screenings, make less than $20 per hour despite having worked at the clinic for many years. Other workers participating in the picket included pharmacy technicians, patient services specialists and clerical workers.

The clinic’s poverty wages belie its mission to serve San Francisco’s Latino immigrant community with high quality, culturally competent care. Established in 1967 through grants from the federal “War on Poverty,” the clinic has helped residents improve their health without costly medical bills.

“We believe in our clinic’s mission; but we also believe paying its caregivers a living wage should be part of that mission,” Campos said.