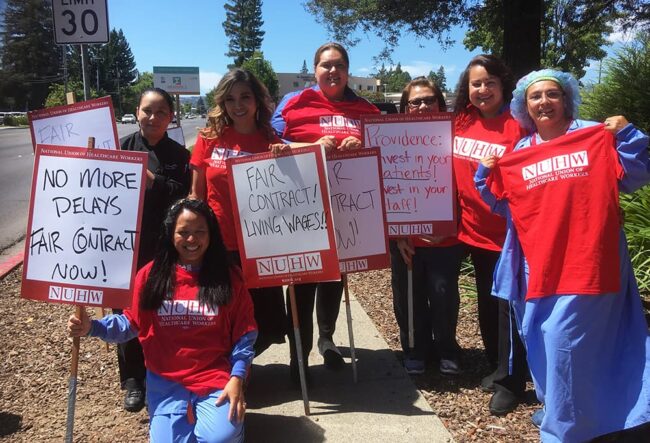 The pickets were covered by the Napa Valley Register and Eureka Times-Standard, as well as KRCR in Humboldt County.

In a recent survey, 92 percent of bedside caregivers at Providence St. Joseph hospitals throughout Northern California reported that their shifts are understaffed at least once a week. Nursing assistants reported having to care for as many as 20 patients at a time.

Instead of using its resources to fix the problem, Providence is demanding in contract negotiations the unlimited right to cancel caregivers’ shifts even though that would only worsen the understaffing crisis.

“We can’t provide quality patient care if we don’t have enough caregivers,” said Paula Reimers, a respiratory therapist at Queen of the Valley. “And the hospital won’t be able to retain quality workers if we can’t make enough to help support our families.”

In 2017, those hospitals reported combined profits exceeding $126 million, yet Providence laid off more than 70 caregivers and failed to meet state-mandated requirements for providing charity care for patients who couldn’t afford medical bills. Now Providence wants to merge its Northern California hospitals with Adventist Health System/West, which would drastically reduce services at St. Helena Hospital in Napa County, where the new company would have a monopoly on acute care hospitals.

“The bigger Providence St. Joseph gets, the less responsive it is to the needs of our community,” said Mikkel Foisy, a radiology technician at St. Joseph Eureka. “Now is the time for everyone to hold this corporation accountable for safely staffing its hospitals and investing in patient care.”