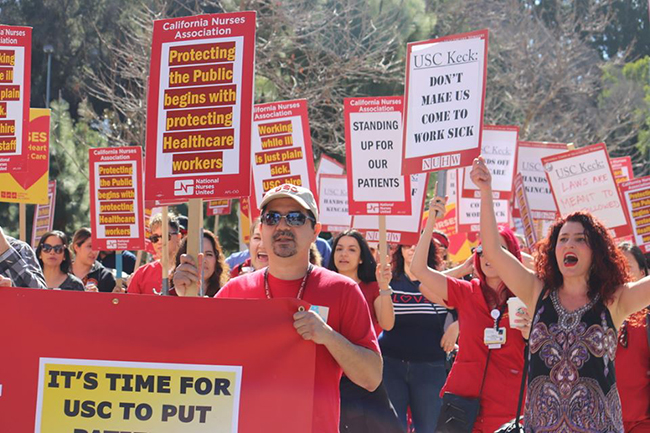 Caregivers at the University of Southern California’s Keck Hospital and Norris Comprehensive Cancer Center picketed on February 11 to protest USC’s illegal policy changes that will make it harder for more than 2,600 hospital employees, including NUHW members and registered nurses, to take sick leave for themselves or care for sick children, spouses, or parents.

In violation of its union contracts, USC this month unilaterally imposed new rules that limit sick leave and impose harsh penalties on workers who need more time to recover from illnesses or take care of their sick family members. Caregivers picketed to protest the violation of their contracts and express concerns that the new rules will force many of them to work while sick and risk spreading illnesses to their patients.

“My family has had to cope with serious illnesses, and being able to use my full sick leave helped us get through tough times,” said Mekicia Gillett, a laboratory assistant at USC Norris Cancer Center. “I don’t understand how USC or our patients benefit from limiting our ability to care for ourselves or our families during the moments they need us most.”

State law guarantees that workers can use up to half their paid-time-off allotment as Kin Care to care for sick family members. However, USC is claiming the right to unilaterally limit all forms of sick leave to no more than 96 hours, which amounts to eight days for workers on 12-hour shifts. The university is also imposing draconian new attendance rules in which a single unexcused absence could result in a final warning before termination.

“As a healthcare employee, we come in contact daily with patients who are ill,” said Lucy Lamont, a patient coordinator at Keck Hospital of USC. “The risk of us contacting infections and illnesses is greater than the general public. I take that risk because I love my job and my patients. But it’s not OK with me that USC will turn around and punish me for getting sick.”

Following the picket, USC softened its proposal by scrapping a plan to make it easier to discipline workers for being tardy, but we are still fighting to overturn the entire policy.