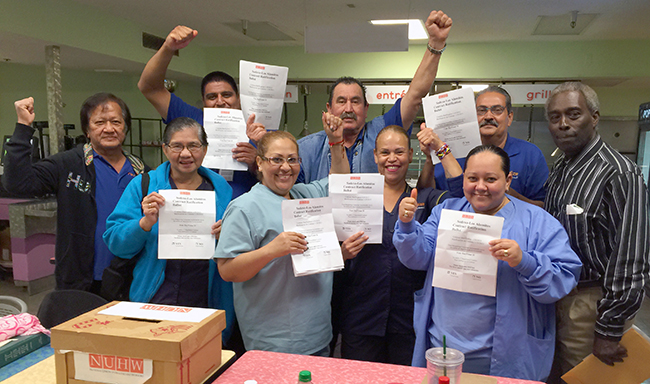 NUHW members have ratified nine contracts so far this year.

Members at two Orange County hospitals, Kindred Brea and Kindred Westminster, ratified first contracts in July and August. These contracts included across-the-board wage increases of at least 4% this year, a bonus this year of at least 1%, plus a 2% wage increase next year and 3% in 2017. Members also won recognition of seniority, weekend differential standardization, a grievance procedure including binding arbitration, and the establishment of a patient care committee on employer-paid time, among other important victories.

In June, members at Providence Tarzana Medical Center in the San Fernando Valley ratified their second contract, which includes immediate wage increases of at least 3% for all employees, retroactive pay increases back to January 2015, a ban on subcontracting, and improvements to the patient care committee.

Radiology Associates of Marin General Hospital, a Marin County independent affiliate of NUHW, ratified their first NUHW-negotiated contract in mid-July. The imaging techs fought long and hard, conducting an informational picket and threatening to strike before finally reaching a new contract with no economic takeaways and a fair wage increase. As a prelude to full merger with NUHW, Radiology Associates members recently voted to increase their dues to match those paid by NUHW members.

Members employed by Corizon, the for-profit provider of health services for inmates at Alameda County’s Santa Rita Jail and Glenn Dyer Detention Center, overwhelmingly ratified a hard-fought first contract in April. Following more than a year of fruitless negotiations, Corizon employees overhauled their contract campaign plan, developing proposals based on the input of employees and attacking unsafe working conditions. They mobilized politically, reaching out to the sheriff and the Alameda County Board of Supervisors. The increasing political pressure and the threat of a strike caused Corizon to finally agree to a fair contract. The next day, when the bargaining committee returned to work, they were greeted with a standing ovation from their coworkers. Corizon has a dismal patient-care record at prisons throughout the country and operates with inadequate oversight in Alameda County. NUHW members will continue to hold the corporation accountable.

Kaiser Optical workers in Northern California accepted Kaiser’s final offer in March. Kaiser then claimed it made a mistake by including retroactive pay increases in the offer and attempted to withdraw it. The National Labor Relations Board has sided with NUHW in its claim that Kaiser acted illegally. Kaiser must soon decide whether to settle or go to trial against the NLRB.

Members at Los Alamitos Medical Center ratified a second contract in January with a 3.5% raise the first year and 3% for the second and third years. The contract also establishes a 401(k) retirement plan, standardized differentials, grievance and arbitration standards, just cause discipline standards, and regular meetings with management to discuss ongoing issues.

Bargaining continues in other NUHW units.

Members at NUHW’s two University of Southern California units, Keck USC and Keck Sodexo, have reached a few tentative agreements after a handful of bargaining sessions.

Members at Hazel Hawkins Memorial Hospital in Hollister began bargaining their second contract in May and members at Salinas Valley Memorial are negotiating their third.

Members at San Francisco Nursing Center, where a new owner recently threw out the existing contract, are bargaining their third while striking over the employer’s drastic cuts to workers’ healthcare coverage. And members at San Rafael Healthcare and Wellness Center in Marin County, where bargaining has dragged on for more than a year, recently struck for two days.