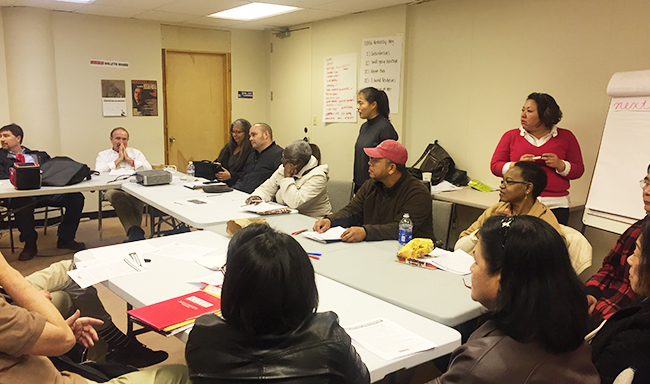 With a steady stream of executive orders signed in his tumultuous first week on the job, President Donald Trump has upended the lives of millions of immigrants and their familIes and cast a pall of uncertainty over our nation’s healthcare system. The new government taking shape in Washington D.C. will have major implications for us as caregivers and union members. In addition to radical changes to healthcare, we can expect President Trump to appoint a National Labor Relations Board that is friendlier to management than it is to us.

As a union that prizes democracy, NUHW scheduled special general membership meetings across the state from January into early February to hear members’ thoughts on how we should approach the new federal government, hold politicians accountable to our communities, and stand up for each other and our patients.

There are two meetings left, in Los Angeles and Orange County. See details below.

In the eight meetings we have held so far — in the San Francisco Bay Area, Sonoma and Humboldt counties, Sacramento, the Central Coast, Inland Empire, and San Diego — we had robust discussions about immigration, universal healthcare, the threat to our rights as a union, and much more.

We also discussed two resolutions from our union’s democratically elected executive board. The first resolution, which has been adopted by the board, reaffirms our support for a Medicare for All universal healthcare system and efforts underway to make that a reality in California. The second resolution, which would declare that we are a “Sanctuary Union” committed to defending the rights of immigrants, has been recommended by the board for discussion at our meetings.