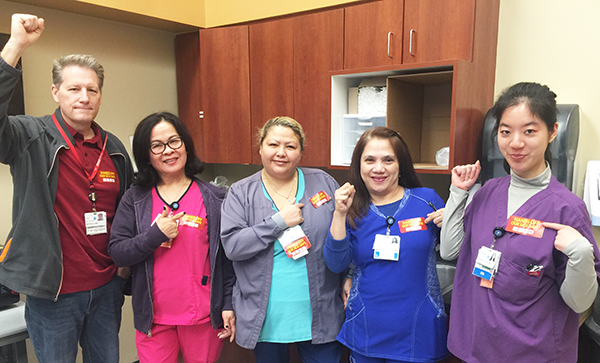 Kindred had planned to eliminate sick time hours and require workers to use paid time off (PTO) hours for sick time. Because Kindred did not plan to make up for it by increasing employees’ PTO accrual rates, the plan added up to a net loss for workers,  as it would have required them to use PTO for vacation and when they get called off. Nor did Kindred propose to increase the cap on the amount of PTO a worker can accrue.

Kindred’s proposal did not come during contract negotiations. This was an effort to push through a scheme mid-contract without bargaining with workers.

We sent a firm response to Kindred: “The employer has no authority to wholly disregard the contract and established pay practice, and we decline to engage in mid-term bargaining.”

We then launched a series of collective actions at all four NUHW-represented facilities — Brea, Westminster, San Leandro, and San Diego — to demonstrate our opposition to Kindred’s plan to eliminate sick leave. NUHW members wore “Hands off our sick days!” stickers at each facility and organized groups of workers to confront local management. When we gave notice that we would start leafleting outside each hospital, management backed down and withdrew the proposal.

We won this battle, but the fight isn’t over. We will stay united to fight this proposal again when Kindred is likely to raise it again in our next contract contract negotiations, which start this spring for many of our San Leandro members.