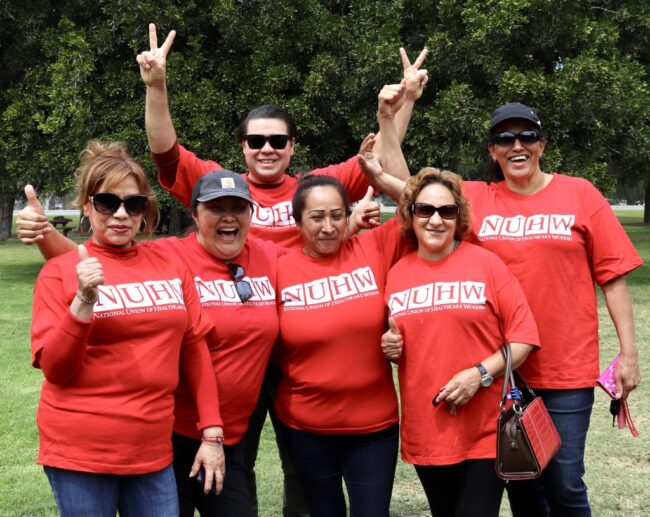 These Environmental Services workers had been employed by Sodexo, a French multinational company that pays poverty wages. Several workers have been making pennies above the state minimum wage, and some with 20 years of experience were making as little as $14.30 per hour.

After joining NUHW, these members walked picket lines and demanded a fair contract. To support them, NUHW and our political allies worked to pressure USC to bring the jobs in-house. Our campaign included actions on the USC campus and a social media posts illustrating how little workers made compared to university administrators and how easily USC could afford to give them raises.

USC has agreed to cancel its contract with Sodexo later this year. As part of the agreement, many of our members will be paid at least $3 more per hour, receive free family HMO health insurance, a retirement plan with a 5 percent employer contribution, an hourly wage scale that tops out at $21.15, and the protection of an NUHW contract.

Our fight to do right by Sodexo workers is far from over. We still need to win fair contracts for our Sodexo workers at three Southern California hospitals owned by Tenet Healthcare.

Earlier this month, we held a picnic for Sodexo workers where our members at Norris had the chance to share their experiences with their Orange County brethren and encourage them to keep up the fight.