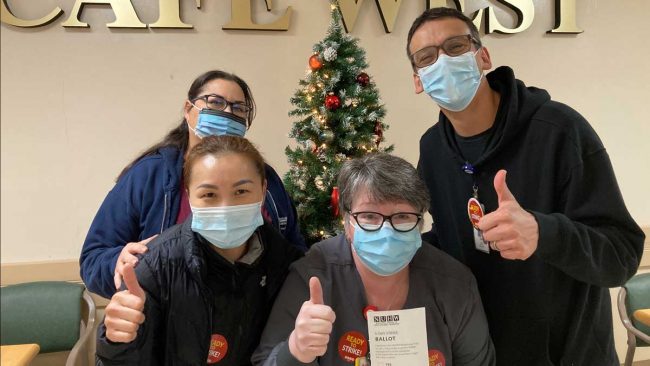 More than 100 NUHW members at West Anaheim Medical Center are readying for a strike as the for-profit hospital refuses to address severe understaffing and make wages more competitive.

With 96 percent of NUHW members casting ballots, the vote was nearly unanimous to authorize a strike.

“We’re not backing down,” said Ian Bowie, a radiologic technologist. “We owe it to each other and our patients to win a contract that honors the work we do and provides the resources we need to care for our community.”

No strike date has been set with more negotiation sessions scheduled for January. The strike vote comes just weeks after members held a picket outside the 167-bed hospital that is owned by Prime Healthcare.

With the hospital refusing to pay competitive wages despite reporting a $5 million profit last year, workers have been leaving in droves. So far this year, West Anaheim has lost nearly all of its phlebotomists, who perform laboratory work, as well as numerous respiratory therapists who operate ventilators. Consequently, nurses and other remaining workers must perform additional tasks and work additional shifts.

“Management cares more about profits than their patients and staff,” said Sam Taina, a respiratory therapist. “Their lack of respect and refusal to bargain in good faith has resulted in high turnover, jeopardizing patient care.”