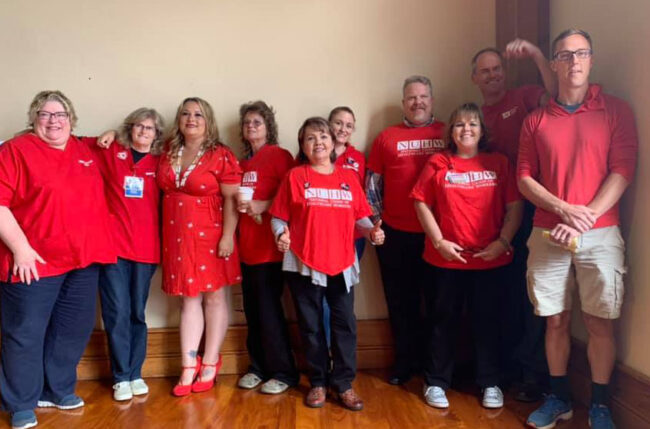 The partnership would essentially merge two of Northern California’s largest health care providers, setting the stage for them to further reduce staffing and services that would put patients and caregivers at risk.

The threat to patient care is especially severe in the North Bay, where Adventist would scale back services at its hospital in St. Helena, caregivers warned during the hearings.

“Adventist intends to dramatically cut services at its St. Helena hospital, including psychiatric services and obstetrics, and funnel those patients to Queen of the Valley and Santa Rosa Memorial,” said Taylor Davison, an emergency department registrar at Santa Rosa Memorial Hospital. “They claim the hospitals can absorb this, but have presented no impact assessments to back up that claim.”

The partnership needs to be approved by California Attorney General Xavier Becerra, who convened hearings to receive input from caregivers, patients, and community members. NUHW members attended these hearings and urged the attorney general’s office to conduct a thorough impact assessment and hold additional hearings before ruling on the merger.

After hearing NUHW members and others about the need for additional hearings, Becerra agreed to push back the deadline for ruling on the merger and scheduled an additional impact hearing in Napa on August 2.

The proposed Adventist partnership comes three years after St. Joseph Health merged with Providence Health & Services. At that time, hospital executives promised the merger would improve patient care, but they proceeded to reduce staffing and violate their requirement for providing charity care.

Adventist is a notoriously anti-union corporation. It pays respiratory therapists, EVS workers, lab assistants, and nursing assistants 20 to 25 percent below average their peers in Northern California.