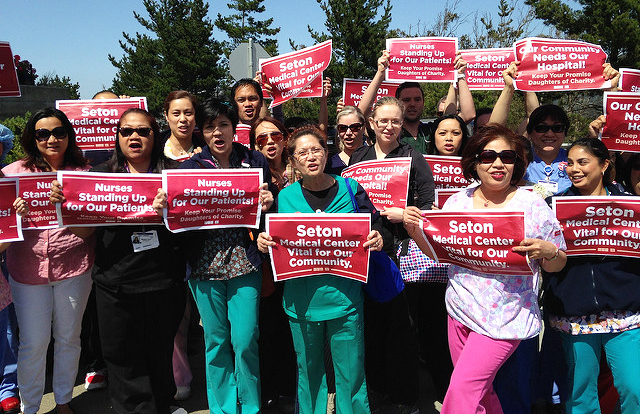 Caregivers at Seton Medical Center rallied with their nurse colleagues this month to demand that Verity Health Systems, the hospital’s owner, be transparent about the hospital’s prospective sale and possible closure.

The February 12 rally, organized by the California Nurses Association, came as Verity has failed in its attempt to finalize the sale of Seton Medical Center in Daly City and Seton Coastside in Moss Beach. These hospitals provide critical services to underserved communities in Northern San Mateo County.

The rally was organized after Verity did not participate in  an emotional February 8 Town Hall meeting in Daly City during which more than 200 community members and caregivers, including NUHW members, called for Seton Medical Center to remain open.

“Seton Medical Center and Seton Coastside provide vital services to Northern San Mateo County patients,” said Rosalie Murti, a licensed vocational nurse and new steward at Seton Coastside. “Verity must share everything it knows about the potential sale of our hospitals and be fully transparent with the public.”

Verity declared bankruptcy in 2018, and a deal to sell Seton and several other Verity hospitals all but collapsed in December, leaving it with just a few anticipated months of operating funds, according to SF Weekly. Another potential buyer, Apollo Medical Holdings, has emerged but there is concern it could take months for the offer to be accepted — time that Seton might not have before it runs out of funds.