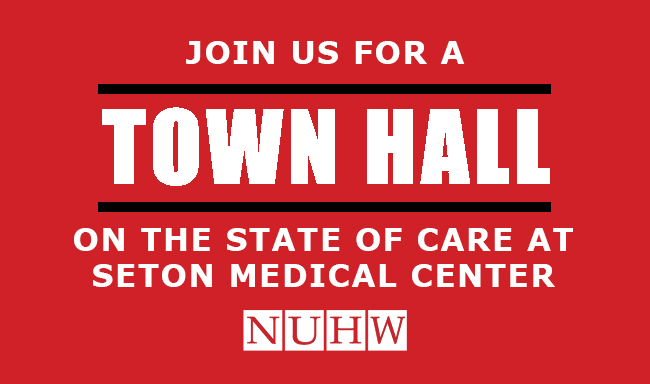 Public invited to share concerns and ideas with San Francisco Supervisor Jane Kim, Assemblymember Phil Ting, and Daly City Vice Mayor David Canepa
SAN FRANCISCO/DALY CITY — The Daly City and southwestern San Francisco communities will come together for a town hall meeting Saturday, October 15, to discuss the state of health care at Seton Medical Center.
Seton patients, caregivers, and the community are invited to share their ideas and concerns with San Francisco Supervisor Jane Kim, Assemblymember Phil Ting, and Daly City Vice Mayor David Canepa from 2 to 4 p.m. at Broadmoor Community Center, 501 87th Street, Daly City.
It has been a year since BlueMountain Capital Management, a New York hedge fund, took over the hospital’s operations after striking a deal with Daughters of Charity. How has our community hospital fared over the past year under BlueMountain’s control? What has been the impact on patients and caregivers? What steps can the community take to ensure quality care for patients as we move forward?
Seton Medical Center, Daly City’s largest employer, has served our community’s poorest and most vulnerable residents since Daughters of Charity opened the hospital in 1912. After a century of charitable care, the community was concerned to hear in 2014 that Seton Medical Center, Seton Coastside, and four other Daughters of Charity hospitals were up for sale, and that the most viable suitors were for-profit companies.
BlueMountain agreed to Attorney General Kamala Harris’s terms for the sale, which included maintaining the system’s essential services for at least ten years and meeting spending targets for charity care. Once the transaction was approved, the Daughters of Charity system became Verity Healthcare System, its board of directors replaced by a board appointed by BlueMountain, which established a management company, Integrity Healthcare, to handle the system’s day-to-day operations.
This put thousands of Daly City and southwestern San Francisco residents in a strange and uncertain situation. After entrusting their health care for decades to a charitable organization with a long history in the Bay Area, they were now dealing with a for-profit New York investment company with no ties to the community.
Supervisor Kim, Assemblymember Ting, and Daly City Vice Mayor Canepa invite the public to join the discussion and to help ensure that our community retains access to quality care.
The town hall is co-sponsored by the National Union of Healthcare Workers (NUHW), which represents 12,000 caregivers throughout California, including 700 employees of Seton Medical Center and Seton Coastside.