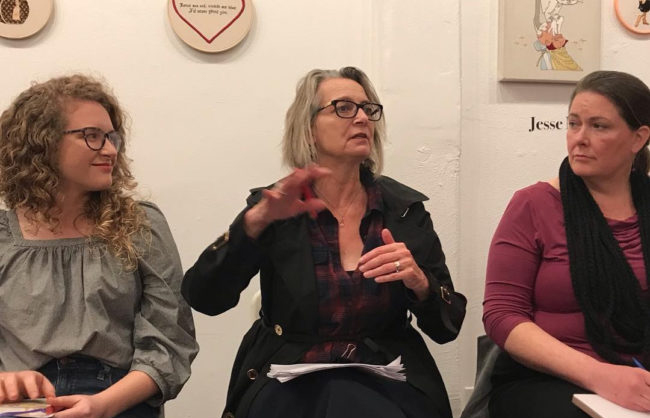 White, a Kaiser psychiatric social worker, joined union leaders from UNITE HERE and UTLA, to talk about their recent strikes and how they have built power in their workplaces.

“I’ve never felt more of a feminist than when I was building power with my coworkers to take on the boss,” White told the audience of more than 50 people at a women’s art space in East Hollywood.

She also stressed how the strikes waged by Los Angeles teachers, hotel workers and mental health clinicians were intertwined. “These workers are our patients; our issues are their issues,” she said after the panel discussion. “You have to see yourself as part of a movement.”

White discussed past actions taken by NUHW-represented Kaiser clinicians including forcing Kaiser board members to give up their seats after conflicts of interests were revealed.

“Everyone was kind of in awe about how we took on Kaiser,” she said.

The Democratic Socialists of America’s Los Angeles chapter invited White to speak at the forum after she addressed them late last year seeking support for the Kaiser strike.

“Elizabeth provided a really powerful example of how the issues NUHW members have with Kaiser intersect with other labor struggles,” said Max Belasco, who helped organize the event. “She really put in context the importance of health justice and the monopoly Kaiser has over people’s mental health care.”