NUHW joins the No Coal In Oakland movement

Kirstin Quinn–Siegel, a marriage and family therapist in NUHW’s Kaiser IBHS bargaining unit, joined other Oakland medical professionals at a March 15 Oakland  City Council meeting to urge the council to bar coal-carrying trains from passing through the city. 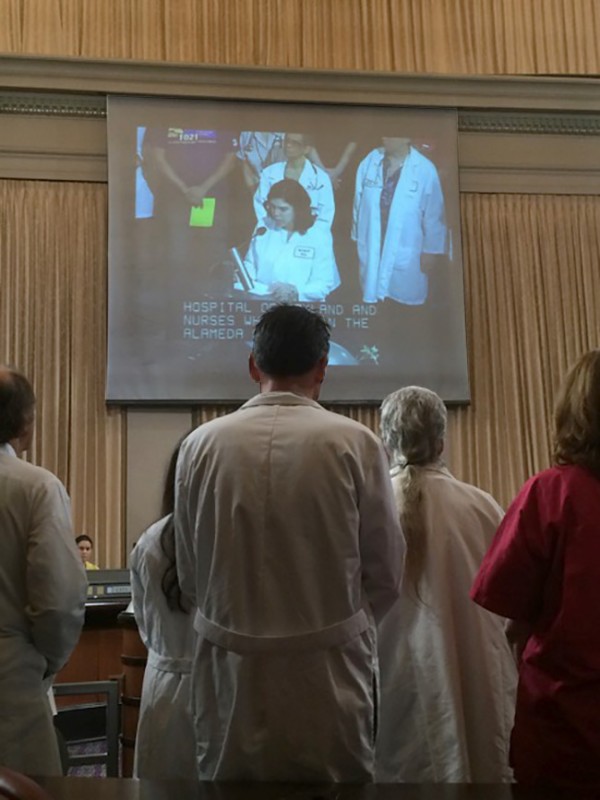 Kirstin’s statement to the council:

My name is Kirstin Quinn-Siegel. I am a Licensed Marriage and Family Therapist at Kaiser Permanente in Oakland and a member of the National Union of Healthcare Workers, whom I am representing here.

Our union represents healthcare workers at Kaiser Permanente in Oakland, Children’s Hospital of Oakland, and nurses who work in the Alameda County jail system.

Our union is opposed to the proposal to allow trains loaded with coal to move through Oakland. Abundant evidence shows that to allow this would have a devastating impact on our environment, and on the health of the people of Oakland, particularly children.

The coal terminal and trains bringing in coal would set back California’s reputation for being a real leader in concretely addressing climate change.

The National Union of Healthcare Workers calls on City Council to take action now to not allow the coal terminal and coal trains in order to protect the people of Oakland and the planet.

The No Coal in Oakland campaign is working to prevent coal from coming though the former Oakland Army Base on its way to Asia. Part of the former base is being converted into a bulk export terminal. Despite promises not to export coal, the developer, Phil Tagami, has been secretly negotiating with Utah mining companies to export up to nine million tons of their coal annually. Mile-long coal trains will roll through Utah, Nevada, and Northern California, terminating in West Oakland, unless the campaign is successful in stopping the developer.

From the No Coal in Oakland campaign:

Trains spewing coal dust up and down the rail corridor will pose serious health risks to residents who already suffer from the highest asthma rates in the county, especially in West Oakland. Particulate matter less than 2.5 microns (PM2.5) is regularly lost from coal trains. Studies demonstrate important associations between daily exposure to PM2.5 and a wide range of health impacts — including respiratory symptoms, asthma exacerbation, emergency room visits, adverse birth outcomes, and death from cardiovascular disease. The California EPA and the World Health Organization have specified that there is no clear safe level of exposure to PM2.5. In addition to the adverse health impacts on West Oakland residents and workers on site, burning coal in Asia worsens global warming. Coal is the most carbon-intensive of all fossil fuels and should be left in the ground.