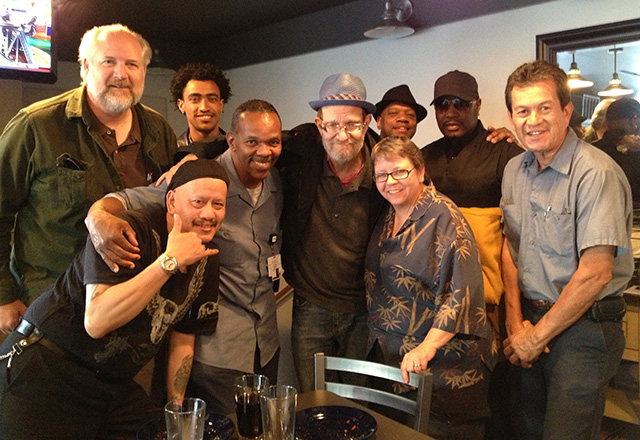 Our union recently lost a great leader, who was beloved and respected by his colleagues at California Pacific Medical Center (CPMC) in San Francisco.

Hugh Lucas used to set up shop in the cafeteria and talk to his colleagues about how to address their concerns and settle any grievances, recalled his former coworker Catalino Calonsag. He mentored stewards, and helped with grievances even after his retirement.

“Hugh was respected by management and workers alike because of his sincerity, dedication, kindheartedness and absolute mastery of the contract,” said Ralph Cornejo, NUHW representative.

Hugh started working at Sutter CPMC as a physical therapy assistant four decades ago when it was still four separate hospitals: Marshal Hale, Children’s Hospital, Davies Medical Center and Pacific Medical Center. He became a leader in our predecessor union, SEIU, Local 250, and when SEIU attempted to seize local control, Hugh and other member leaders such as Linda Ruest and Helen York-Jones, helped form NUHW and keep workers in charge of their union.

Hugh was born in Chicago in 1944 and grew up north of Detroit, the third of five children. He loved sports, music and dogs, but he found his calling caring for patients and his colleagues.

He was known for often giving the peace sign and saying “have a peaceful day” which was also the message on his phone for voicemail. He often joked that if he ran for office, his slogan would be “Hugh for Humans!”

Hugh moved to San Francisco in 1969. He became active in the anti-war movement and in his union, enrolling in San Francisco City College to get certified in labor relations.

“I’m so saddened by Hugh’s passing,” said Beth Cronin, a former co-worker of Hugh’s at CPMC. “He was our beloved NUHW brother, member, colleague, shop steward and union representative. He was able to resolve so many issues for so many NUHW members.”

“Everything Hugh did was out of love and kindness,” NUHW President Sal Rosselli said. “He wanted to help people; he wanted to make the world a better place, and he loved NUHW because he knew he could do that through our union.”

Hugh is preceded in death by his son Dylan Lucas and is survived by his four siblings: Mark Lucas, Pat Jeffs, Adele Keating, and Jan Lucas-Grimm.