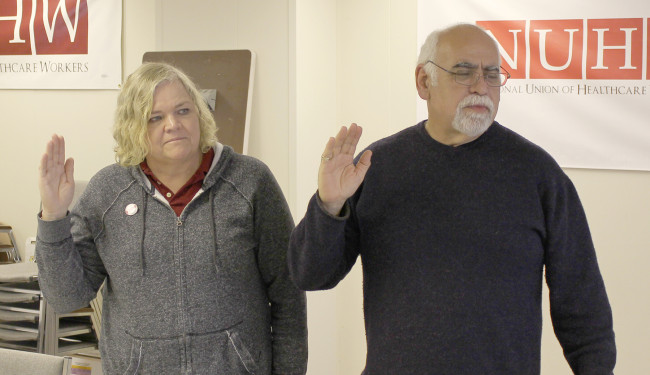 Two Santa Rosa Memorial Hospital stewards, Nancy Timberlake and Mito Gonzales, were sworn in as members of NUHW’s Executive Board at the Feb. 8 monthly meeting. Nancy is a telemetry technician in the St. Joseph facility’s ICU and Mito is a phlebotomist in the Outreach Lab. Both were active from the beginning in Memorial workers’ long and arduous path to organizing with NUHW and have served as stewards ever since.

Nancy and Mito were elected to the Executive Board by a unanimous vote of their colleagues at a January 14 Stewards Council meeting in Santa Rosa, and both will also serve as NUHW delegates to the North Bay Labor Council, which represents 30,000 members of 71 labor unions throughout California.