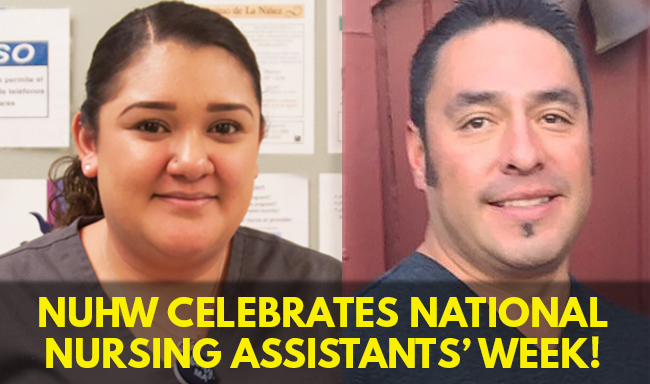 To commemorate Nursing Assistants Week, which begins today, we talked to two of our members (photographed above) — Victor Martinez and Ebony Guifarro — about their work and the challenges they face caring for patients. Here are their stories:

Fountain Valley CNA is all about making a difference

Victor Martinez is a tough guy with a soft touch.

As a certified nursing assistant at Fountain Valley Regional Hospital, Martinez spends his days cleaning, feeding, and helping patients who can’t care for themselves.

He’s helped move a bedridden 800-pound man and sat in the emergency room with young people who are confused, depressed, and dealing with addiction.

“I like this job because sometimes you make a difference in people’s lives,” Martinez said. “That’s what I’m all about.”

Martinez, 47, is also making a difference for his co-workers as a union leader. He learned the importance of organizing as a union shop steward at a previous job, where he filed grievances against managers who were bullying workers.

“When I see people get mistreated, it gets me fired up,” he said. “I’ve always been a person who sticks up for people who aren’t comfortable sticking up for themselves.”

Martinez is in the process of becoming a steward at Fountain Valley, where he’s filed successful grievances and has seen big improvements since caregivers joined NUHW.

“It’s put an end to a lot of managerial abusiveness — at least in my unit,” he said. “I felt targeted at work, but now that we have our contract, I don’t feel that pressure anymore.”

Martinez still feels pressure to care for his ever-increasing volume of patients. When he started at Fountain Valley seven years ago, he was assigned to about eight patients per shift. Now it’s up to 15.

“There is no time to waste,” he said. “Our phones are ringing off the hook. They want you to be in every room when they call, but it’s impossible.”

When he does have a spare moment, Martinez enjoys getting to know his patients. Last year, he befriended a terminally ill young woman. When she went into cardiac arrest, Martinez desperately pumped her chest as emergency room workers tried in vain to revive her.

“She is someone I’ll never forget,” Martinez said. “She was just a humble, strong, and cheerful person.”

Martinez hopes everyone he cares for feels that way about him. “I treat my patients the way I’d want someone to treat my family members,” he said. “With respect, dignity, and courage.”

She grew up a short walk from the clinic and lives nearby with her husband, mother, and three-year-old daughter. Her patients include relatives, neighbors, and old family friends.

“I really enjoy working here,” Guifarro said during a recent lunch break. “It feels like I’m doing something for my community.”

She likes taking vital signs and administering EKGs, but the 25-year-old has another goal in mind: following in the footsteps of her mother who was a nurse in her native Guatemala.

“In some sense, I feel I can only do so much as a medical assistant,” she said.

Still, Guifarro knows better than most of the challenges that lie ahead. Her mother gave up nursing when she arrived in California. Without the requisite certification, she helped support her children by working as a nanny and a housekeeper.

Guifarro is looking into nursing programs, but she’s still paying off student loans and making time for her family.

What little free time she had last year went to helping serve on her unit’s bargaining committee. She’d finish a long day at work and head into the negotiating room, often with her mother and daughter waiting for her just outside.

“It was long and frustrating, but we needed a lot of people to show up to make an impact,” she said. “We do a lot of work here. I felt like we weren’t getting paid what we deserve.”

Guifarro sees about 20 patients a day, doing everything from administering vaccines and urine tests to taking measurements and blood pressure and conferring with doctors and nurses.

When she gets a little time to chat with patients, they often talk about the neighborhood’s transformation from an ethnic enclave to a pricey hipster’s paradise.

Like many natives, Guifarro wonders if she’ll have to leave. Having three generations in one apartment isn’t easy, but the Mission is her home — and so is the nonprofit clinic.

“I understand I could go somewhere else and make more money,” she said. “But this is where my heart is.”