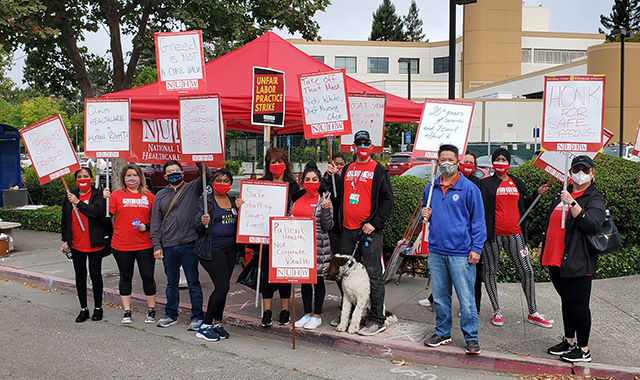 NUHW members who fought to win fair contracts and protect their health during the pandemic were awarded the prestigious Workers Rising Award from North Bay Jobs with Justice.

Here is what the organization wrote about NUHW members:

“When their employer insisted on cutting health and sick leave benefits during a pandemic, nearly 750 NUHW members at Santa Rosa Memorial Hospital responded with a five-day strike that galvanized public support for essential workers and revealed the misplaced priorities of Providence, the hospital’s out-of-state corporate owner.

As an intimidation tactic, Providence threatened to lower its proposed wage offer if there was any work stoppage, but the workers, who include nursing assistants, respiratory therapists, medical technicians, housekeepers, administrative clerks and kitchen staff, refused to be intimidated and — with support from community allies — ultimately won a new contract with 13 percent raises without any immediate benefit reductions.

During the fight, frontline caregivers testified to major issues at the hospital during a Workers Rights Board hosted by NBJwJ. In addition, NUHW organized healthcare workers at Sonoma County Jail, secured a contract at Petaluma Valley Hospital, and settled a first contract at Providence’s Queen of the Valley Medical Center in Napa that provided for substantial raises and job protections for workers who fought for years just to get management to the bargaining table.

NBJwJ was proud to stand with NUHW caregivers at each of these facilities!”