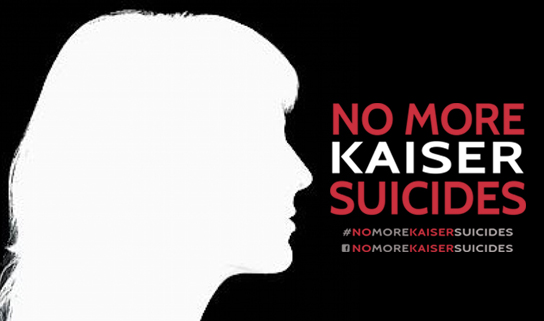 No More Kaiser Suicides is a social media campaign created in partnership with Courage Campaign and the East Bay chapter of the National Alliance on Mental Illness (NAMI). The Facebook page, facebook.com/nomorekaisersuicides, features facts, data, and patient stories that demonstrate the harmful, sometimes tragic impacts of Kaiser Permanente’s failure to staff its mental health clinics with enough psychologists, therapists, social workers, and psychiatric nurses to provide timely care to its members. The page has an accompanying Twitter account, twitter.com/nomorekpsuicide, and the hashtag #nomorekaisersuicides.

The campaign is an extension of Courage Campaign’s website, TheRealKaiserPermanente.com, drawing greater attention to facts and patient stories from media, reports by the Department of Managed Health Care,  NUHW’s “Care Delayed, Care Denied” report, and NUHW.org.

The only patient stories posted on the Facebook page are anonymous stories from the DMHC reports, stories that have already been reported in the media, or stories that are published with the permission of patients and their families.

With little promotion, the Facebook page has been seen by more than 35,000 people and reaches a weekly audience of about 10,000. In its first three weeks, the page has gathered more than 2,000 “likes.” That number is growing too. Followers so far include Kaiser patients, mental health professionals, journalists, and many mental health organizations and suicide prevention/awareness organizations.