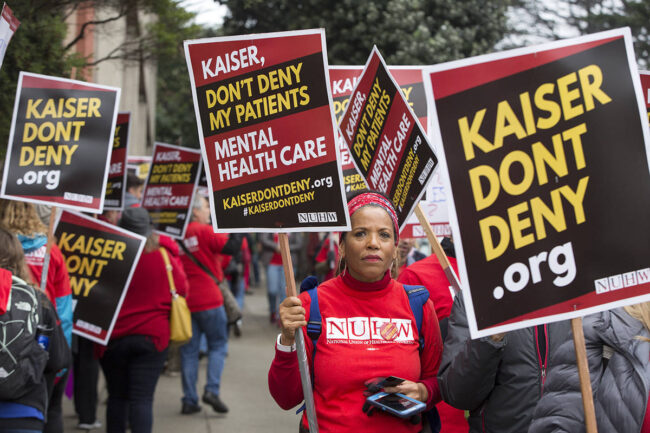 This piece was originally published on Medium.

When California lawmakers enacted the state’s Mental Health Parity Act in 1999, mental health patients were supposed to be assured of receiving the same coverage and level of care for mental illness as they would for any other medical condition.

For 20 years, all we’ve gotten is lip service.

But it looks like that’s about to change. Earlier this month, Governor Gavin Newsom announced that he’s going to make state regulators “do their damn job and … go aggressively on parity.”

“I want to prepare folks for some high-profile fines,” Newsom declared during his annual budget presentation.

I’ve been talking about this for too many years. And I am saying this looking into one of these damn cameras because there are folks out there not doing the right thing. And they will be fined. And they will be held accountable. And I will deeply highlight their lack of accountability in this space.”

Newsom didn’t mention Kaiser Permanente by name, but he didn’t have to. For over a year, Kaiser psychologists, therapists, social workers, and psychiatric nurses in California have helped move the issue of mental health parity to the forefront by highlighting the struggles their patients face—often having to wait two months between appointments.

They’ve held two five-day statewide strikes over the past 13 months, as well as one-day strikes at Kaiser’s clinic in Pasadena where appointment wait times have exceeded three months. Also San Francisco, where staffing reductions have forced the clinic to eliminate 70 percent of its group therapy programs.

Less than a month before, Newsom called on the Department of Managed Health Care to get “in the business of real enforcement,” as hundreds of striking Kaiser mental health clinicians marched through the streets of downtown Sacramento before holding a demonstration outside the agency’s headquarters.

“We’re doing everything we can as therapists to hold Kaiser accountable,” Michael Torres, a Kaiser psychologist, told reporters before the protest.

Meanwhile, the Department of Managed Health Care has repeatedly chosen to merely slap Kaiser on the wrist. Kaiser has been found deficient on three consecutive state mental health surveys, yet has been fined only $4 million — seven years ago, in 2013. That might seem like a lot, but the fine amounted to approximately one tenth of one percent of Kaiser’s net profit that year.

The message to Kaiser was clear: It costs a lot less to violate California’s mental health parity law than it does to follow it.

With more than 9 million members, Kaiser is the largest private health care provider in California — and a critical component for achieving real parity for mental health care. But for Kaiser to take the lead, it must first settle a contract with its mental health clinicians that re-establishes it as a desirable place to give and receive mental health care.

Kaiser clinics are understaffed because most private-practice clinicians don’t want to work at Kaiser. They don’t want to be put in a situation where their caseloads are so unmanageable that they can’t see patients as often as they need to be seen. And they don’t want to work for an employer that spends millions touting its commitment to mental health parity only to insist that mental health clinicians receive poorer retirement and health benefits than nearly every other Kaiser worker in the state.

Having known Governor Newsom for decades, I believe he’ll back up his parity pledge. It’s time for Kaiser to finally do the same. And that starts with settling a contract that treats its nearly 4,000 mental health clinicians fairly and includes measures to reduce appointment wait times, increase staffing, and provide clinicians enough time to provide quality patient care.

Sal Rosselli is president of the National Union of Healthcare Workers.