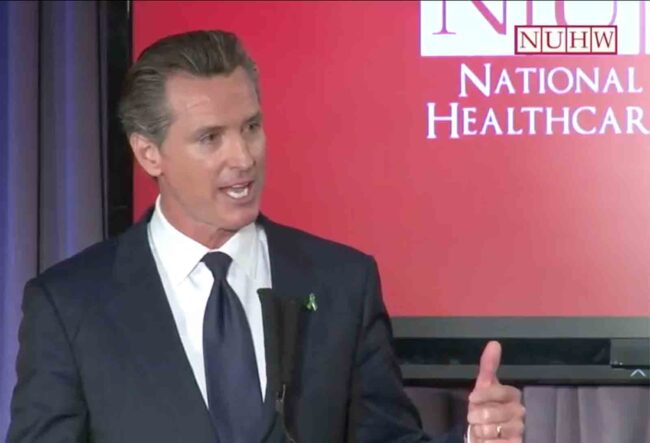 Newsom can deliver healthcare for all to California

On Sunday, October 22, Lt. Gov. Gavin Newsom won an endorsement that bodes well for his chances to become California’s next governor.

The National Union of Healthcare Workers doesn’t support candidates based on polling numbers or backroom deals. Our 350 elected stewards get to decide who we support, and they’re not afraid to go against the grain.

Two years ago, they endorsed Sen. Bernie Sanders for president at a time when most Americans had never heard of him. On Sunday, many of those same janitors, nurses, X-Ray technicians, pharmacists, social workers and psychologists voted to endorse Newsom for governor.

You’d be hard-pressed to find a better-informed electorate. Before the vote, NUHW staged a 90-minute candidate forum. The top four Democratic candidates appeared on stage together for the first time, answering questions from a panel of journalists about issues that are critical to workers across the state, including health care, mental health parity, immigration and housing costs.

NUHW members have been leaders in the movement for universal health care for decades. On Sunday, Newsom gave his unequivocal support for a single-payer health care system to insure all Californians.

But as a San Francisco resident, who led the state’s largest health care union during most of Newsom’s tenure as mayor, I know that he is more than a leader. Newsom is a listener, who has gotten big things done, because he’s been willing to learn from those most impacted by his decisions.

Healthy San Francisco, which provides universal access to health care for city residents, has been a success, in part, because Newsom listened to us and other health care advocates and signed off on requiring employers to pay toward their workers’ health insurance.

He also listened to San Francisco’s home care providers. At a time when many local leaders had to be pushed and shoved to provide higher pay for these workers, who were mostly women of color, Newsom grasped the value of keeping seniors and people with disabilities living in their own homes. He made sure to set aside money in The City’s budget over and above the amounts the state was willing to match.

At this critical moment for our health care system, when President Donald Trump is trying to dismantle the Affordable Care Act and take us backward, Newsom is uniquely well-placed to move us forward and achieve Health Care for All. He understands health care policy and the value of health care workers. He understands the challenges of expanding coverage and has a track-record of building consensus to get the job done.

We’re ready to lean into it with Gavin Newsom. We think he can be that governor who gets the job done.