To read the full report, click on the image below.

With more than 7 million members, Kaiser Permanente is California’s largest HMO and plays a massive role in the state’s healthcare delivery system by operating more than 35 hospitals and several hundred clinics across the state. Less well known, however, is Kaiser’s role in providing mental health services to Californians. Ranking perhaps second only to the State of California, Kaiser is one of the state’s largest providers of mental health services. The Oakland-based company guarantees its members a full array of inpatient, outpatient and emergency mental health services provided by several thousand mental health professionals. Each year, thousands of Kaiser’s members seek treatment for conditions ranging from autism, anxiety and bi-polar disorder to depression, schizophrenia and suicidal ideation. 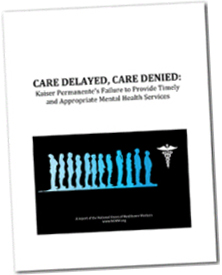 Click on the image above to
read the full report.

Despite Kaiser’s pledge to provide comprehensive mental health services to its members, an in-depth analysis suggests that the HMO’s mental health services are sorely understaffed and frequently fail to provide timely and appropriate care. Patients often experience lengthy delays in obtaining services, an overreliance on “group therapies,” and frustrating obstacles that push many patients to forgo care or seek treatment elsewhere at their own cost. Drawing on a survey of hundreds of Kaiser’s mental health clinicians as well as documentation from regulatory agencies, court filings, patients and frontline caregivers, this study finds that Kaiser frequently fails to comply with California laws aimed at protecting patients’ timely access to appropriate services. [1]

Furthermore, it finds that Kaiser’s failures are systematic and often purposeful. Indeed, the scope and specifics of these failures are sufficiently grave as to merit investigation by state and federal authorities as well as actions for recovery of funds by public and private payers, including individual Kaiser members. For example, despite receiving more than $10 billion annually from Medicare to provide a full range of services, including mental health care, Kaiser appears to be miscoding patient evaluation procedures, which may result in fraudulent claims to the Medicare program.

The study’s key findings are the following: 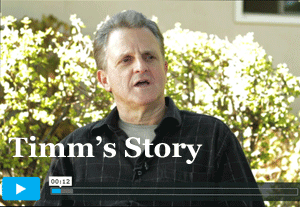 • Kaiser often violates California laws requiring HMOs to provide patients with “timely  access” toappropriate mental health services. Clinicians report that patients frequently endure waits of four weeks or longer for return appointments even though California law mandates a maximum wait time of 10 business days for both initial and return visits unless a licensed health professional has documented that a longer waiting time “will not have a detrimental impact on the health of the enrollee.”[2] Furthermore, many clinicians report that patients’ first appointments are often nothing more than group orientation sessions in which initial evaluations do not take place. When such evaluations finally do take place, clinicians report they are often cursory and insufficient, but nonetheless are coded as if they were thorough and complete. In a survey of 305 Kaiser clinicians, nearly 90 percent of the respondents reported there is insufficient staffing at their clinic to provide patients with timely return visits.  More than 75 percent reported that they are either frequently or very frequently “forced to schedule return visits further into the future than you believe is appropriate.” 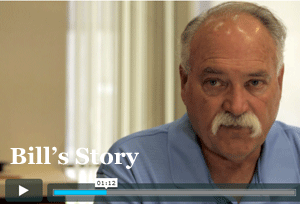 • Kaiser reportedly falsifies patient scheduling records in an effort to avoid being cited by  state regulators for lengthy appointment delays. Clinicians report that Kaiser often uses “shadow” scheduling records, deliberately miscategorized appointments, and false appointment cancellations to avoid detection of delays that exceed California’s “timely access” requirements.• Kaiser often funnels patients into group therapy even when individual therapy would be more effective. Kaiser often pressures its clinicians to assign patients to group therapy even when clinicians conclude that individual therapy may be more beneficial. More than 50 percent of Kaiser clinicians report that patients are either frequently or very frequently “assigned to group therapy even though individual therapy may be more appropriate.” 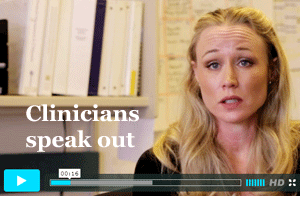 • Kaiser reportedly performs initial patient evaluations and other mental health services that not only fall short of recommended clinical standards, but are coded incorrectly in possible violation of Kaiser’s contracts with both private and governmental purchasers.  In San Diego, Kaiser has reportedly directed clinicians to spend only half as much time as the clinically recommended minimum for interviewing, assessing and diagnosing patients. This reported “speed-up” of Kaiser’s assessment procedures can have serious implications. For example, short-cut evaluations lasting only 20 to 30 minutes may result in the misdiagnosis of patients’ conditions. Furthermore, Kaiser appears to be miscoding these procedures in a manner that may result in fraudulent claims to Medicare and other governmental and private purchasers. Interviews with clinicians indicate that Kaiser may be replicating this practice at many sites in California.Kaiser’s current mental health care deficiencies are part of an ongoing pattern of substandard care. During recent years, government inspectors have cited Kaiser multiple times for failing to provide patients with timely access to mental health services. For example, in 2005 the California Department of Managed Health Care (DMHC) cited Kaiser for failing to provide its patients with timely access to mental health care. In 2010, Kaiser was fined $75,000 for unreasonably delaying a child’s autism diagnosis for almost 11 months.In short, Kaiser’s systemic failures recall many of the well-documented abuses of HMOs from an earlier era – one that California believed its revised and expanded regulatory structure had long ago overcome. Kaiser’s substandard care also comes at the same time that the HMO is reporting record profits