Among the issues that led workers to organize are understaffing that results in poor patient care and low wages that leave workers struggling to get by in one of the wealthiest counties in the nation.

“Our residents are just not getting the care they need,” said Certified Nursing Assistant Ida Bantilan. “We’re so short staffed that we have to work off the clock to care for our residents. We have to work through breaks because there’s nobody to cover for us. Plus we haven’t had wage increases for years. Many people are getting minimum wage.”

The Novato workers’ organizing effort was inspired by a successful two-day strike in August by NUHW-represented workers at another Brius-owned facility, San Rafael Healthcare and Wellness Center, where workers also report declining standards of care and poor compensation.

“Before the San Rafael strike, we thought there was nothing we could do,” said Bantilan. “As a union, we’ll finally have a voice in how the center is run.”

Managers at Novato Healthcare Center waged “one of the most extreme and illegal anti-union campaigns I’ve seen in a long time,” said NUHW President Sal Rosselli. Brius managers fired five union supporters two days before the election, threatened to shut the facility down if the organizing campaign was successful, and promised workers wage increases if the campaign failed. Managers tried to prevent workers from wearing pro-union buttons or stickers and pulled caregivers away from their duties for mandatory one-on-one meetings where they were threatened with deportation if they voted yes.

As reported in a damning exposé by the Sacramento Bee’s investigative reporting team, Brius, California’s largest and most notorious nursing home operator, has been repeatedly cited and fined by regulators and accused by a long-term care ombudsman of “flagrant disregard for human life” for dismal conditions and severe understaffing in the 81 nursing homes the corporation runs throughout the state.

Brius is the subject of investigations by state and federal authorities, including the California Attorney General and the Center for Medicare and Medicaid Services (CMS), which has barred multiple Brius nursing homes from caring for Medicare patients. The company has also been the subject of multiple lawsuits filed by residents and their families. 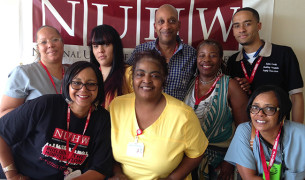 The National Labor Relations Board (NLRB) has impounded the ballots following a Dec. 8-9 union election at Alta Bates Summit Medical Center pending the results of an investigation of misconduct by Sutter Health, SEIU–UHW, and an agent in the NLRB’s Region 32 office.

NUHW, which competed with SEIU–UHW in the election to represent 850 Alta Bates Summit workers, filed Unfair Labor Practice charges and objections with the NLRB after SEIU and Sutter Health illegally distributed false, coercive messages to the workforce regarding the election. Sutter Health repeated and amplified SEIU’s false and threatening message that workers would lose their current contract and put their wages and benefits at risk if they voted to switch unions.

NUHW also filed an objection with the NLRB claiming that an agent in the NLRB’s Region 32 (Oakland) office further spread this false and coercive message to workers who were instructed by SEIU to call the NLRB to inquire whether their contract was at risk in the election. Seven workers have offered to provide the NLRB with affidavits regarding the agent’s conduct. The investigation will be conducted by the NLRB’s Region 20 (San Francisco) office.

Federal law dictates that the current union contract remains in place during and following a union election and bars the employer from making any changes to the contract without bargaining with the new union. It is also illegal for an employer to threaten workers with wage and benefit freezes or cuts.

“Sutter and SEIU colluded and lied to us,” said Andrea Garcia, an environmental services worker at the hospital. “Sutter’s illegal actions, SEIU’s fear tactics, and the Labor Board’s misrepresentation of the law tainted our fair choice in this election.”

The NLRB’s Region 20 office will investigate the charges and determine whether to count the ballots or schedule another election.

“We have a right to a fair election free of intimidation and lies,” said Keesha Johnson, patient transport. “It’s outrageous that Sutter and SEIU would blatantly lie to workers to prevent them from voting for the union of our choice.”