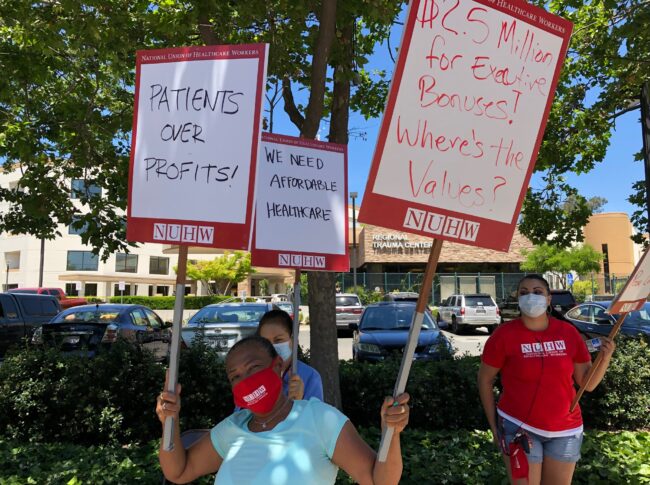 In retaliation, the highly-profitable hospital has declared it will reduce proposed wage increases in addition to cutting benefits and doubling the cost of employee healthcare

Now, nearly 800 workers, including nursing assistants, respiratory therapists and medical technicians, represented by the National Union of Healthcare Workers, are fighting back. They notified the hospital Thursday of their intention to hold a five-day strike from Monday, July 20 through Friday, July 24.

Workers have been without a contract for more than a year, and the hospital is insisting on benefit cuts and healthcare takeaways despite recording massive profits. Rather than negotiate in good faith to avoid a work stoppage, hospital management has told workers it will rescind one-third of a proposed wage increase in retaliation for moving forward with a strike.

“We don’t have enough PPE to keep us safe, but management wants us to pay twice as much to insure our families,” said Shannon Signer, a radiology technician at Santa Rosa Memorial. “Our health has never been at greater risk. We need our hospital to support us, not squeeze us for every last dime during a pandemic.”

Over the past three years, workers have kept the hospital open through two wildfires and a pandemic. Meanwhile Santa Rosa Memorial, which is the designated trauma center for all Sonoma county residents, has netted $201 million in operating profits.

But instead of investing that money to improve patient care and provide for its dedicated workforce, Santa Rosa Memorial — and its out-of-state parent corporation — are lavishing executives with six-figure bonuses, while demanding that caregivers accept:

Santa Rosa Memorial is one of the most profitable hospitals owned by Providence St. Joseph Health, a multibillion dollar hospital chain, which has received more than $500 million in federal stimulus funds, according to a recent New York Times story.  Over the past three fiscal years, Santa Rosa Memorial has reported $201 million in operating profits — nearly double the combined operating profits of Providence’s four other Northern California hospitals.

“I was evacuated during the 2019 Kindcade Wildfire and still kept working,” said Taylor Davison, who registers patients in the hospital’s emergency room.” Now Santa Rosa Memorial wants to cut my sick leave and health benefits during a pandemic. We can’t provide the care our community needs when our hospital only cares about profits.”