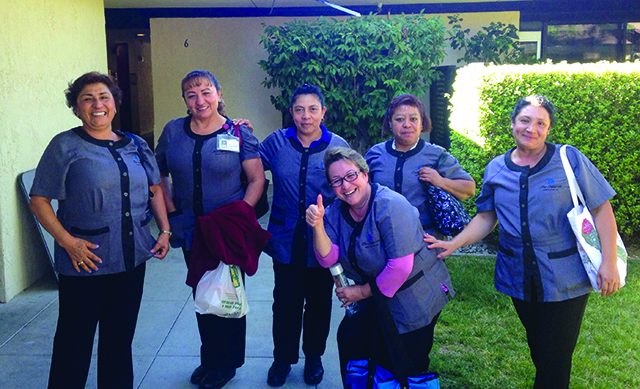 NUHW members at The Sequoias – Portola Valley recently ratified a short-term contract that preserves the terms and conditions of their previous contract and sets the stage for future negotiations with their new employer.

After decades of being directly employed by The Sequoias, a Bay Area retirement community, these housekeeping and dietary workers learned only recently that their jobs were being subcontracted to Morrison Living.

NUHW members were concerned that their new employer would try to immediately impose takeaways, but the worker-led bargaining team immediately began negotiating with Morrison, which agreed to honor all terms and conditions of the contract with Sequoias including pay rates, wage scales, sick leave balances, vacation accrual, seniority and hire dates.

The new contract, which expires in May, will also honor pensions that workers accrued as employees of The Sequoias, maintain a 401(k) plan and include several health plans as well as a Flexible Spending Account (FSA) for out-of-pocket medical expenses.

The bargaining team is already back at work preparing to negotiate a long-term contract with Morrison.