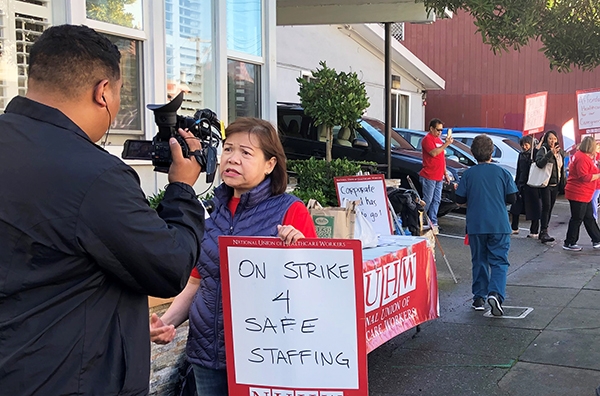 Workers at San Francisco Post Acute, a 53-bed nursing home in San Francisco, held an informational picket this month to protest the home’s refusal to pay them a living wage, while its Utah-based corporate owner makes millions in annual profits running the facility.

The picketers included nursing assistants, housekeepers and cooks at the nursing home, where the average hourly wage is $17.87 — barely half of San Francisco’s $32.25 “self-sufficiency standard” for a single adult with one child.

“We have no staff,” Luz David, a caregiver at the facility told the news website Mission Local. “Even the licensed vocational nurses, after probation, they’re gone. All because of wages.”

The Providence Group, one of California’s largest nursing home operators, cut salaries and benefits when it took over the home in 2015. Last year, the home reported a nearly $1.2 million profit making it the city’s third most profitable skilled nursing facility. Meanwhile Providence has refused to invest in the facility or prioritize the needs of its residents. A broken dryer in the laundry room recently forced caregivers to clean linens in a local laundromat for more than a week.

Juanita Ulloa, told Mission Local that under Providence, the home has prioritized short-term clients to maximize reimbursements from Medi-Cal and Medicare, while leaving caregivers with insufficient medical plans they can’t afford to use.

Ulloa told Mission Local that if she needed to go to Kaiser and get medication, she would easily spend at least $100 for medicine and hundreds more for a visit. That never happened until Providence changed the health plan.

“We work hard with the patients; we’re the ones taking care of them,” Ulloa said in Spanish. “One X-ray is $85, and pain medicine is at least $150. In one whole hospital visit, we’ll end up spending our entire check.”

Caregivers, who are seeking significant cost-of-living wage increases and improved health coverage, have already authorized a one-day strike that could take place early next year.