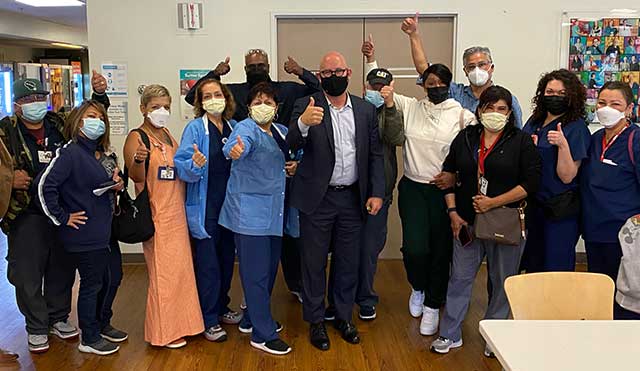 Members at CPMC and elected officials put pressure on Sutter

After Sutter paused contract bargaining for four months, hundreds of NUHW members signed a petition in July, urging Sutter to return to the bargaining table. A delegation of workers delivered the petition to the hospital’s chief operating officer, and requested that management agree to at least two bargaining sessions per month until a new agreement is reached.

Workers and their allies in local government are also at odds with Sutter regarding how to fulfill California’s COVID-19 vaccine mandate for healthcare workers. Unlike many large healthcare providers, CPMC is refusing to provide a grace period for workers who will not be fully vaccinated by the September 30 deadline, and is threatening them with immediate termination.

At its September 14 meeting, the San Francisco Board of Supervisors passed a resolution urging the San Francisco Department of Public Health to establish uniform guidelines for how healthcare facilities can support employee compliance with the vaccine mandate. The resolution, authored by Supervisor Gordon Mar, calls out CPMC by name, for its plan to terminate workers that would “further diminish the size of a healthcare workforce already stretched thin.”

Since then, CPMC has changed course. Now, unvaccinated members will be placed on a leave of absence after September 30 and have until October 15 to be vaccinated.