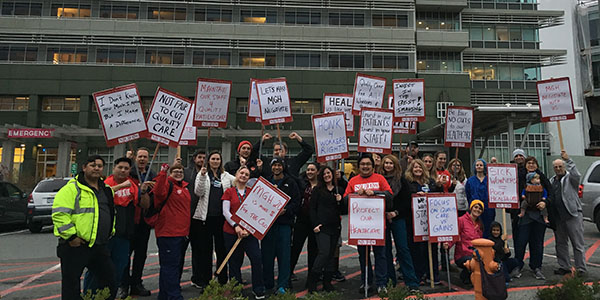 How do you know when you have a successful informational picket? When you represent 65 radiological technologists at a hospital, but bring out more than 125 workers all marching in solidarity.

That was the scene on Dec. 19 outside Marin General Hospital where employees represented by the California Nurses Association, Teamsters and Stationary Engineers, Local 39 all came out to support our members picketing against the hospital’s demand for takeaways in ongoing contract negotiations.

Marin General reported a $17 million profit last year, but management wants to eliminate an affordable PPO health insurance option. The hospital is already starting to make the same demand from other unions, which have joined with us to fight the takeaway.

“Marin General nurses are affronted that management wants our NUHW coworkers to pay hundreds of dollars per month for their health coverage,” said Michelle Freitag, an Emergency Department nurse. “We support our co-workers in their fight. We’re all in this together.”

Solidarity among workers was evident throughout the day, culminating in a rally that featured speakers from several unions.

“I was proud to see so many of my co-workers represented by different unions joining together to stand up for what’s right,” said Jenn Raven, a CT technologist. “It’s wrong for Marin General to cut health benefits while it’s reaping millions in profits, and we’re not going to let them get away with it.”

If Marin General doesn’t withdraw its takeaways, we will consider striking with members of at least one allied union early next year.