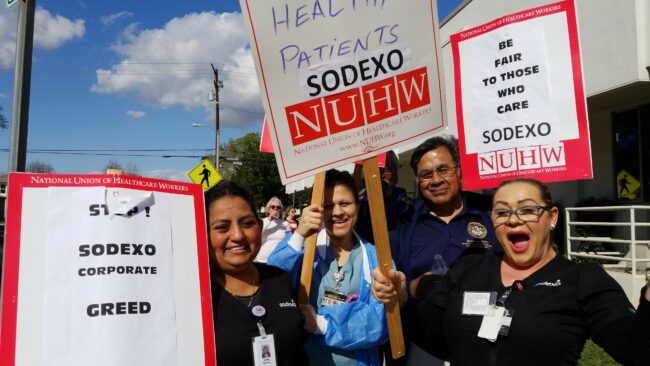 Blowing the whistle on chronic understaffing, infection control workers at Lakewood Regional Medical Center and Los Alamitos Medical Center are calling on both hospitals to improve pay and staffing to address their subpar record at keeping patients safe from potentially lethal infections.

A staff survey at both hospitals found that roughly three-in-four infection control workers reported their units being understaffed at least once a week. Roughly half of them reported having to take shortcuts to complete their cleaning duties on time. At Los Alamitos, nearly two-thirds of infection control staff reported often lacking key equipment such as bleach and garbage bags. After compiling the survey results, the National Union of Healthcare Workers (NUHW), published reports on infection rates at both hospitals.

“We work to keep patients safe and healthy,” said Edith Gutierrez, an environmental services worker at Los Alamitos Medical Center. “There is no excuse for these hospitals to risk the lives of patients by understaffing our departments and failing to give us the tools we need to prevent dangerous infections.”

Both hospitals received a “C” grade this year from the Leapfrog Group, a national nonprofit hospital-safety organization that collects data from more than 1,800 hospitals. Using data provided by the hospitals, Leapfrog found that both hospitals scored roughly three times worse than the average hospital for MRSA, a potentially lethal bacterial infection that is resistant to antibiotics.

The hospitals also were found to have higher-than-expected rates of Clostridium difficile, a bacterial infection that can cause severe diarrhea and colon damage. Over a recent three-year period, 138 patients at Los Alamitos contracted the bacterial infection, according to federal data. Los Alamitos has been penalized 1 percent of its annual Medicare reimbursement rate (roughly $1 million) each of the last two years by the federal Centers for Medicare and Medicaid Services for its high infection rate.

The NUHW reports recommend that Lakewood and Los Alamitos hire more staff to ensure that infection control workers can fully clean the hospitals during their shifts, improve pay to stop rapid turnover of infection control staff and collaborate with workers to ensure there are no shortages in equipment and cleaning materials.

“The solution is simple: hire enough workers to do the job, give them the equipment they need and pay them enough so they can stay and provide for their families,” NUHW President Sal Rosselli said. “Lakewood and Los Alamitos medical centers both make tens of millions in annual profits. They have no excuse for putting their patients at risk of contracting life-threatening infections.”