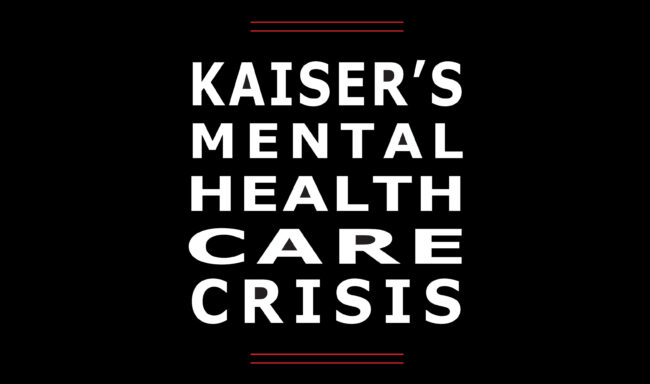 Psychologists, therapists, and social workers will call on Kaiser to immediately take action to fix its failing mental health services and will announce the results of a statewide strike authorization vote

EMERYVILLE —Kaiser Permanente’s 2,500 California mental health clinicians — psychologists, therapists, and social workers — will hold a press conference at 11 a.m. Thursday, November 20, to call for the resignation of a top Kaiser executive and to demand that Kaiser, after years of stonewalling its patients and clinicians, finally take action to address the crisis plaguing its psychiatric departments throughout the state. Fifty Kaiser clinicians will be on hand to announce the results of their union’s strike authorization vote, which would approve a statewide strike if Kaiser again refuses to address their concerns regarding patient care in early-December bargaining sessions.

Journalists are invited to participate in the press conference in person at NUHW’s Emeryville office or by phone by calling (712) 775-7035 and entering access code 245874. An informational packet including a detailed account of Kaiser’s ongoing mental health care crisis will be made available to all participants. Clinicians in both Southern and Northern California will be available after the call to talk with journalists. Patients also will be available to discuss their experiences with Kaiser’s dangerously inadequate mental health services.

In September, after more than a year of stonewalling its patients and employees, Kaiser finally paid a $4 million fine levied against it by state regulators because of the HMO’s chronic, illegal delays in mental health care — delays which have sometimes led to tragic consequences, even suicides. But Kaiser still denies wrongdoing and has done nothing to fix the staffing problems in its psychiatric clinics.

“The fine is a drop in the bucket for Kaiser, which is enjoying record profits,” said NUHW President Sal Rosselli. “Kaiser has made more than $13 billion since 2009, and this year’s profits are up 40% over last year’s record profits. But despite its deep coffers, Kaiser has refused to invest in the staffing required to provide the mental health care services that its members pay for.”

Spurred by whistleblower complaints from Kaiser’s own psychologists, therapists, and social workers, an investigation by the state’s Department of Managed Health Care (DMHC) found the HMO guilty of “serious” and “systemic” violations of California law that put mental health patients at risk. The result: In June 2013, the DMHC hit Kaiser with a $4 million fine — the second largest in the agency’s history — for forcing thousands of patients to endure illegally lengthy waits for care, falsifying patients’ appointment records, and violating the California Mental Health Parity Act, which requires HMOs to provide psychiatric services that are on par with their primary health services.

The parallels with the scandal that engulfed the Veterans Affairs Administration earlier this year are striking and prompted the National Union of Healthcare Workers (NUHW), which represents Kaiser’s 2,500 California mental health clinicians, in June to call for a federal investigation into Kaiser’s psychiatric services.

Contrary to Kaiser’s claims, the HMO did not fix its problems. Instead it merely shifted its resources from return access to initial access. In other words, first-time patients may now find it easier to get an initial diagnostic appointment, but they often are forced to wait weeks, even months for a second appointment — far more than the legal wait time of ten days.

Kaiser clinicians have documented persistent and ongoing violations, including the following:

• In April 2014, one of Kaiser’s Southern California clinics required patients with acute conditions — including auditory hallucinations — to wait more than seven weeks for an appointment.

• In May 2014, Kaiser failed to provide timely mental health appointments to more than 60% of the patients seeking care at Kaiser’s Oakland and Richmond facilities, according to data supplied by Kaiser.

• In July 2014, Kaiser instructed employees in at least one clinic to falsify appointment records rather than provide patients with urgent appointments within 48 hours, as mandated by state law.

• In August 2014, Kaiser’s psychiatry department in San Francisco was so severely understaffed that dozens of patients’ calls to the “Triage Team” languished in the voicemail system for more than a week before staff could even listen to them, let alone respond to them.

• As of September 2014, pediatric patients requiring neuropsychological testing waited 22 weeks before receiving a phone call from Kaiser’s San Francisco psychiatry department to schedule an appointment, according to Kaiser’s records.

“Kaiser simply does not provide enough staff to handle the caseload, and that caseload is growing rapidly,” said Clement Papazian, a social worker at Kaiser in Oakland and president of NUHW’s chapter of Northern California mental health clinicians. “This year Kaiser’s enrollment has increased by 442,000 members in California under the Affordable Care Act. Withholding services while increasing membership is an effective way to score record profits, but it has led to woefully inadequate care, appointment delays that far exceed the legal limit of ten days, and five class-action lawsuits filed by patients and families who have suffered as a result.”

The DMHC is expected to release a follow-up survey of Kaiser’s mental health services by the end of the year. While the findings in that survey are not yet known, a hint was proffered in September by a DMHC official. At a mental health forum in Santa Rosa, Calif., hosted by Congressman Mike Thompson and Sonoma County Supervisor Shirlee Zane, during which Kaiser was blasted by patients who had suffered as a result of its inadequate psychiatric services, Sherrie Lowenstein, the DMHC’s deputy director for legislative affairs, vowed, “We are not done with Kaiser.”

Considering the severity of the violations, and considering the preponderance of evidence that Kaiser continues to violate the law, Kaiser’s mental health clinicians call on Kaiser to take immediate action. In the absence of accountability and strong leadership, Kaiser mental health patients will continue to endure illegal and unethical wait times for appointments; patients in need of ongoing one-on-one therapy will be forced to seek care outside of Kaiser; and many patients in need of acute care will go untreated, sometimes with tragic consequences.

For more on Kaiser’s mental health failures and the efforts of Kaiser clinicians to reform the HMO, see NUHW.org/Kaiser.­­