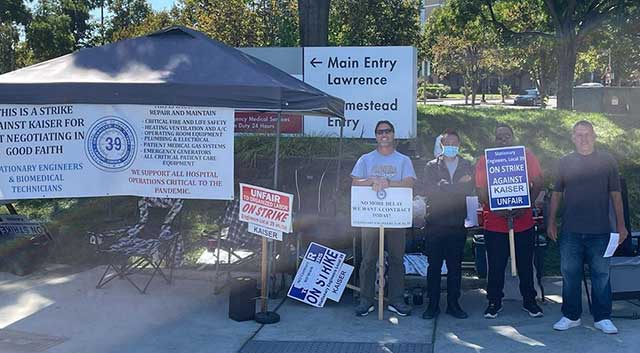 Kaiser Permanente’s labor woes are about to get even worse.

Already enduring a strike by operating engineers in its Northern California hospitals, Kaiser Permanente is now faced with a looming strike threat from more than 30,000 Southern California healthcare workers.

The labor unions include registered nurses, physical therapists, housekeeping attendants, dietary aides, among others, and are part of the Alliance of Health Care Unions that serve in 39 Kaiser hospitals and more than 700 Kaiser medical office buildings.

Kaiser’s proposal would lower the wage scale for almost every job classification represented by the alliance of unions by 26 percent to 39 percent for new hires beginning in 2023, the Los Angeles Times reported.

About 700 members of the International Union of Operating Engineers (IUOE) have been off the job at 24 Northern California Kaiser locations for the past four weeks. IUOE is protesting Kaiser’s proposal of a two percent wage increase.

Kaiser’s clampdown on salaries comes amid soaring profits for the healthcare giant. The company’s health plan reported $89 billion in operating revenue last year and $44 billion in cash reserves. Profits for its privately held medical groups — the Southern California Permanente Medical Group and Northern California’s The Permanente Medical Group — are not made public.

Kaiser’s labor troubles extend into Oregon as well. About 3,400 members of the Oregon Federation of Nurses and Health Professionals (OFNHP) also voted 96 percent in favor of a strike.