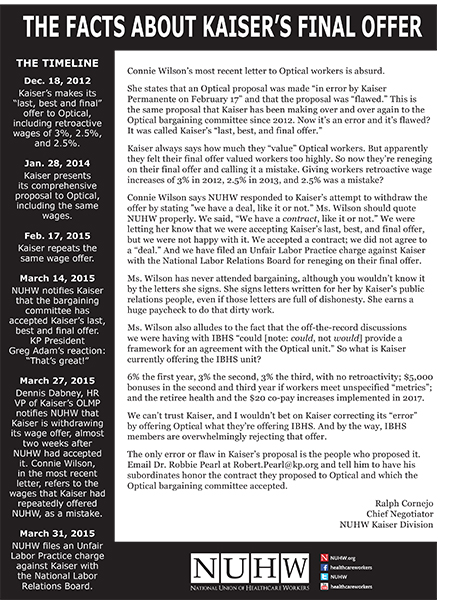 Connie Wilson’s most recent letter to Optical workers is absurd.

She states that an Optical proposal was made “in error by Kaiser Permanente on February 17” and that the proposal was “flawed.” This is the same proposal that Kaiser has been making over and over again to the Optical bargaining committee since 2012. (See timeline below.) Now it’s an error and it’s flawed? It was called Kaiser’s “last, best, and final offer.”

Kaiser always says how much they “value” Optical workers. But apparently they felt their final offer valued workers too highly. So now they’re reneging on their final offer and calling it a mistake. Giving workers retroactive wage increases of 3% in 2012, 2.5% in 2013, and 2.5% was a mistake?

Connie Wilson says NUHW responded to Kaiser’s attempt to withdraw the offer by stating ”we have a deal, like it or not.” Ms. Wilson should quote NUHW properly. We said, “We have a contract, like it or not.” We were letting her know that we were accepting Kaiser’s last, best, and final offer, but we were not happy with it. We accepted a contract; we did not agree to a “deal.” And we have filed an Unfair Labor Practice charge against Kaiser with the National Labor Relations Board for reneging on their final offer.

Ms. Wilson has never attended bargaining, although you wouldn’t know it by the letters she signs. She signs letters written for her by Kaiser’s public relations people, even if those letters are full of dishonesty. She earns a huge paycheck to do that dirty work.

Ms. Wilson also alludes to the fact that the off-the-record discussions we were having with IBHS “could [note: could, not would] provide a framework for an agreement with the Optical unit.” So what is Kaiser currently offering the IBHS unit?

6% the first year, 3% the second, 3% the third, with no retroactivity; $5,000 bonuses in the second and third year if workers meet unspecified “metrics”; and the retiree health and the $20 co-pay increases implemented in 2017.

We can’t trust Kaiser, and I wouldn’t bet on Kaiser correcting its “error” by offering Optical what they’re offering IBHS. And by the way, IBHS members are overwhelmingly rejecting that offer.

The only error or flaw in Kaiser’s proposal is the people who proposed it. Email Dr. Robbie Pearl at Robert.Pearl@kp.org and tell him to have his subordinates honor the contract they proposed to Optical and which the Optical bargaining committee accepted.

Jan. 28, 2014
Kaiser presents its comprehensive proposal to Optical, including the same wages.

March 27, 2015
Dennis Dabney, HR VP of Kaiser’s OLMP notifies NUHW that Kaiser is withdrawing its wage offer, almost two weeks after NUHW had accepted it. Connie Wilson, in the most recent letter, refers to the wages that Kaiser had repeatedly offered NUHW, as a mistake.

March 31, 2015
NUHW files an Unfair Labor Practice charge against Kaiser with the National Labor Relations Board.