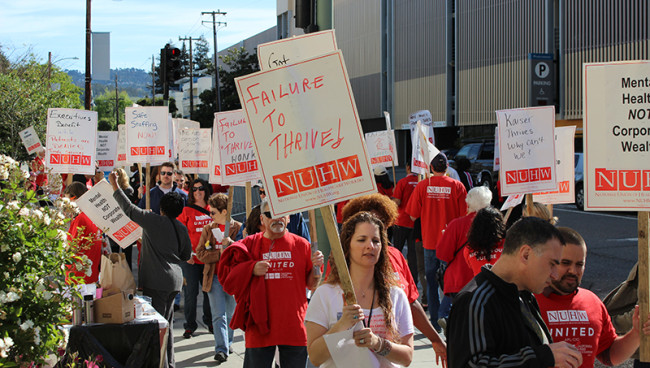 Thirty-five Oakland adult services mental health clinicians — therapists, counselors, social workers, and psychologists — were joined by other clinicians, as well as nurses, building engineers, and patients and their families in a rally to raise awareness about severe hardships faced by Kaiser members throughout the state. The clinicians protested Kaiser’s effort to implement policies at Oakland Medical Center that have been used in Redwood City, where six Kaiser mental health patients have committed suicide.

The Oakland clinicians’ fellow mental health professionals and NUHW members at Kaiser facilities throughout California wore stickers to work Wednesday declaring their support for the strike.

Reporters from Bay Area radio and television stations covered the strike and interviewed clinicians about the issues at hand. Clem Papazian, Kaiser social worker and president of NUHW’s IBHS chapter, started the day at KPFA Radio’s studios in Berkeley, where he was interviewed by Up Front host Brian Edwards-Tiekert. Later KPFA attended the picket to record a segment for its evening news broadcast, and KGO and KQED radio also covered the strike, as did KTVU television, interviewing Kaiser psychologist and IBHS leader Andris Skuja. NBC Bay Area published a story on its website, as did the Berkeley Daily Planet.

Clinicians and supporters gathered at 8 a.m. and picketed outside the hospital while Kaiser officials looked on nervously. Kaiser had attempted to curtail the picket by erecting barricades along the sidewalks and sealing off parking spaces.

“We had great turnout and overwhelming support from Oakland CDRP, Child & Family and of course Adult Service,” said Andris Skuja. “Other groups and individuals joined in, including CNA, Kaiser engineers, some SEIU-represented folks, and labor attorney Dan Siegel, candidate for Oakland mayor.”

“Perhaps the most inspiring moment for me,” said Clem Papazian, “was hearing from our clinicians, Janine and Mindy, speaking so eloquently from the heart.”

Oakland psychologist Mindy Ginne and clinician Janine Thomas talked about their experiences trying to provide care for Kaiser patients. They were preceded by NUHW President Sal Rosselli, who laid out the issues faced by Kaiser patients and caregivers for the better part of five years, and followed by Zenei Cortez, co-president of the California Nurses Association and a nurse at Kaiser South San Francisco. Oakland mayoral candidate and NUHW lawyer Dan Siegel also addressed the group, voicing his support for the clinicians, NUHW, and the Kaiser patients who are not getting the care they need, deserve, and pay for.

Systemwide, Kaiser Permanente’s mental health departments are understaffed, with not enough therapists, psychologists, and social workers to care for the number of patients seeking care. Kaiser members in dire need of  help are often required to wait months for appointments, in violation of state law. And too often when patients do get an appointment, Kaiser cuts costs by funneling them into group therapy rather than individualized care. Oakland clinicians are concerned that these problems will only increase as hundreds of thousands of Californians become Kaiser members under the Affordable Care Act.

Several families have joined a class action lawsuit against Kaiser due to its inadequate mental health services. The lead plaintiff, Susan Futterman Paroutaud, is suing Kaiser over the 2012 death of her husband. Fred Paroutaud was a gifted composer and pianist diagnosed as bipolar who hanged himself in his home after repeated unsuccessful attempts to secure an appointment with Kaiser’s mental health department.

“We are failing our patients, and for some the failures can prove fatal,” said Clem Papazian. “Kaiser Permanente’s policies are forcing mental health clinicians throughout the state to provide substandard care.”

Kaiser caregivers first sounded the alarm about these issues in 2011. Clinicians throughout the state worked through their union, NUHW, to document Kaiser’s policies and the harmful effects on patients. The result was a comprehensive report, “Care Delayed, Care Denied,” that brought these issues to the attention of California’s Department of Managed Health Care. The DMHC confirmed the clinicians’ findings and levied a $4 million fine — the second largest in its history — against Kaiser for illegally delaying patients’ access to mental health services and for “systemic” violations of California law, including the California Mental Health Parity Act.

Unfortunately, Kaiser has done little to correct these problems, and even tried to bar the public from an upcoming hearing on the matter. On April 11, Judge Ruth Astle of the Office of Administrative Hearings in Oakland denied Kaiser’s motion to close the hearing and seal the hearing documents.

“Kaiser needs to get its house in order now,” said Andris Skuja. “Patients’ lives are at stake. If Kaiser can’t care for the patients we have now, how are we going to care for the hundreds of thousands of new members coming in under the Affordable Care Act?”

Kaiser Permanente’s failure to address these problems led clinicians to take matters into their own hands by taking their case to the public. In addition to Wednesday’s strike, a clinician at Kaiser’s Santa Rosa facility has resigned in protest and is blogging about the obstacles faced by him and his fellow caregivers in tending to their patients’ needs (see 90daystochange.com).

“We have successfully led the way for other clinics to come out from behind the shadows and make the voice of psychiatry clinicians everywhere heard loud and clear,” said Clem Papazian. “Armed with this demonstrable capacity to move as one, local management will certainly be less inclined to underestimate our ability to powerfully withdraw our labor in the future. They will be less inclined to  interpret our inclinations toward future action as just an idle threat as we move forward in bargaining on a host of department wide issues. I predict that local management will also feel far less confident about trying to marginalize and split us in the future.”

“There is no question at all that this strike exceeded my expectations,” said Andris Skuja. “It more than met our objectives, and sent the right message to Kaiser management. It felt strong and right to truly advocate for our patients and for the integrity of our treatment and work. It’s too easy to give in to burnout, cynicism, and to get disillusioned by the raw power of unchallenged oppressive practices and the ugliness of calculated corporate exploitation of both the vulnerable people we try to help and of those of us who have loyally worked to make Kaiser a better organization that’s fair, ethical, and adheres to the law. Sure, it’s a lot of hard work and we lost a day’s pay. But solidarity and a chance to speak truth to power: Priceless.”

“I recommend other clinics try this out for themselves,” he added. “Your colleagues and NUHW will have your back.” 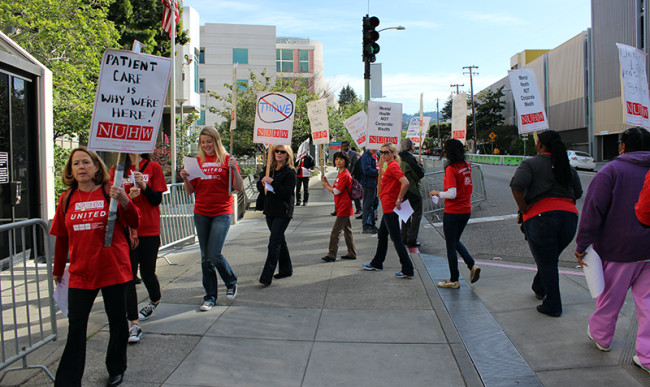 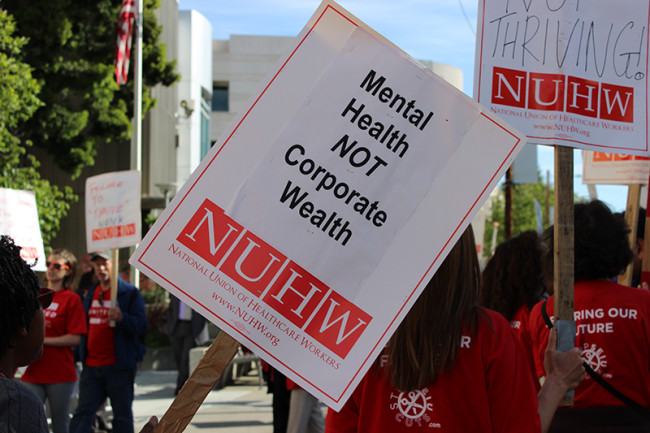 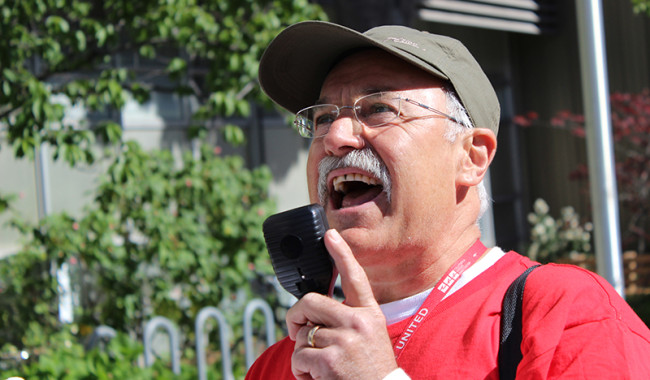 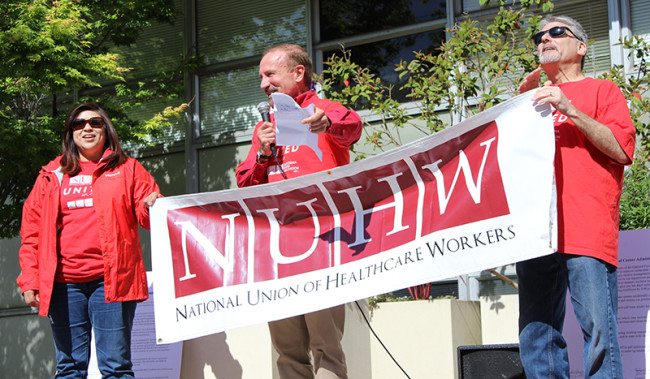 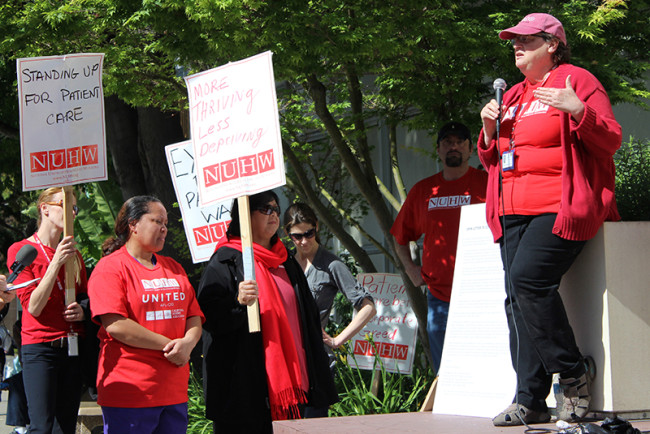 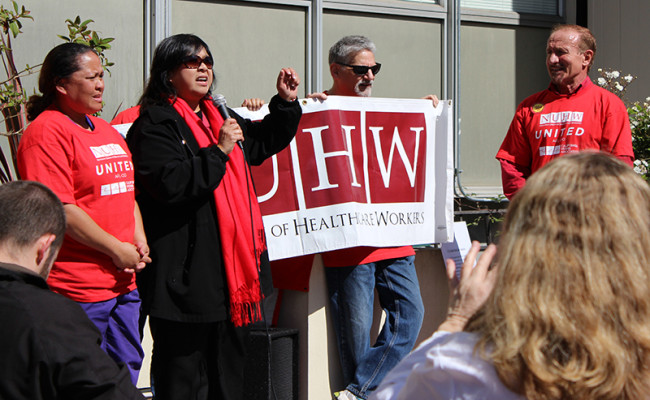 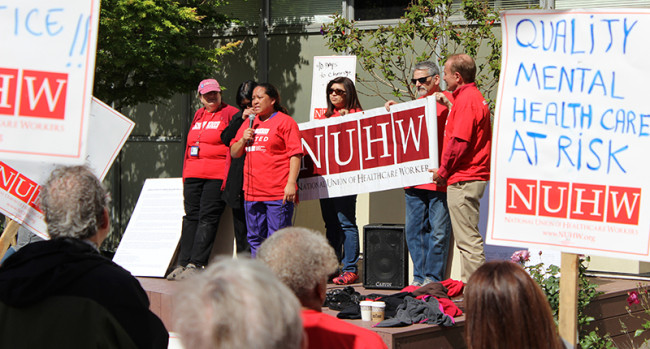 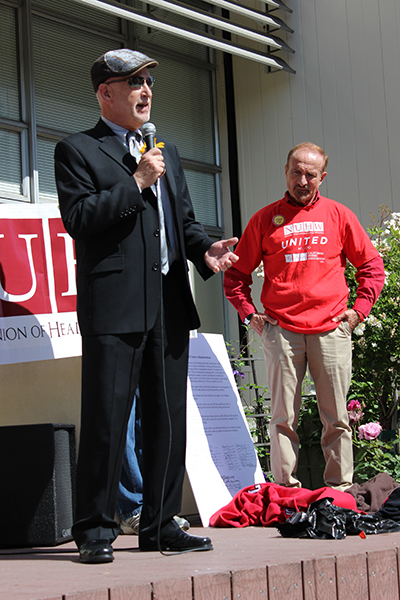 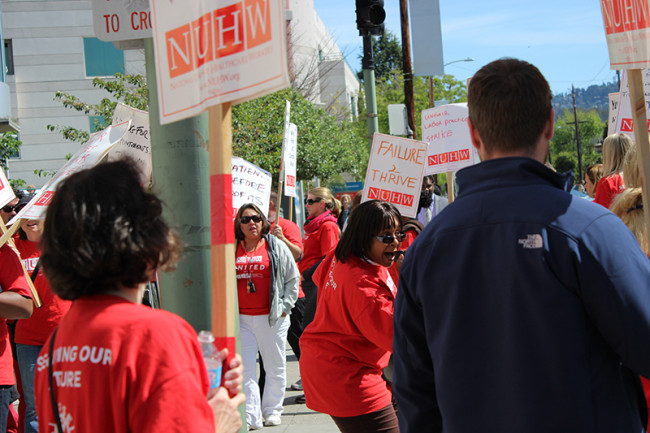 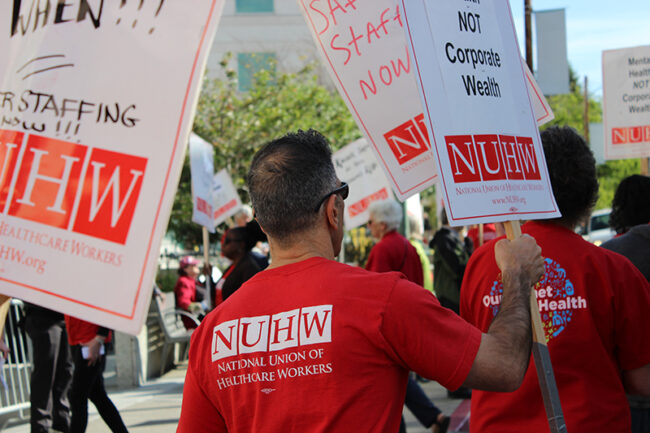