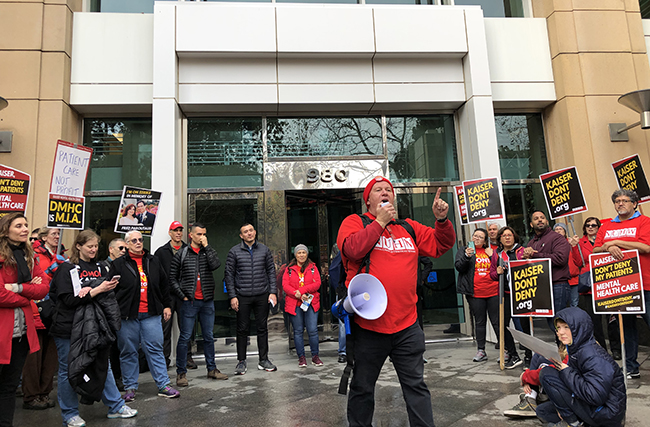 The statewide strike by more than 4,000 Kaiser mental health clinicians and mental health professionals last December has had a profound impact on the enforcement of mental health parity laws and is helping to spur new parity legislation.

The Department of Managed Health Care (DMHC) opened a formal investigation this month into ongoing problems that deny many Kaiser patients timely and appropriate care. The DMHC came under intense pressure to investigate Kaiser after hundreds of Kaiser workers marched on the agency’s headquarters during the December strike.

Following the strike, Governor Gavin Newsom announced that it was time for regulators to “do their damn jobs” when it comes to enforcing rules requiring insurers to provide the same level of care for mental illnesses as they do for physical illnesses.

Last month, a team of a dozen therapists and NUHW staff detailed Kaiser’s violations of state parity rules during a two-hour meeting with top DMHC officials.

While the DMHC investigates Kaiser, Assemblyman Marc Levine has proposed a bill guaranteeing most patients the right to to see a therapist within 48 hours after being released from a psychiatric hold. Before introducing the legislation, Levine’s staffers had conferred with NUHW for guidance on addressing the issue.

Assemblymember Phil Ting introduced an even more sweeping bill this week. His legislation, which is supported by NUHW, would require insurers like Kaiser to provide follow-up mental health treatment appointments within 10 business days unless a clinician determines that a longer wait time is appropriate.