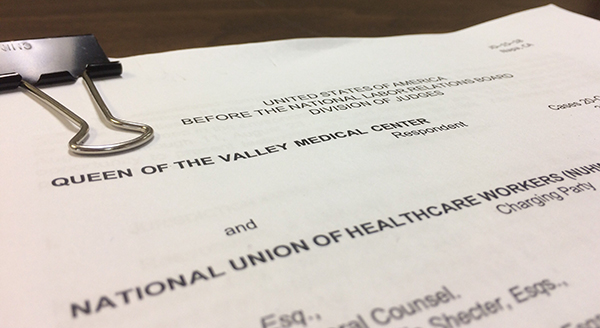 NUHW members scored another legal victory over Queen of the Valley Medical Center when a federal judge ordered the hospital to resume good-faith bargaining and reverse retaliatory actions taken against caregivers.

In a 77-page ruling issued February 28, Judge Sharon Levinson Steckler found that Queen of the Valley Medical Center had committed a “litany” of violations against 420 caregivers who voted overwhelmingly to join NUHW in 2016.

Among the violations, Queen of the Valley was found to have illegally ordered a pro-union housekeeper to switch shifts, knowing that it would make it much harder for him and his wife, who also worked at the hospital, to commute to their jobs and care for their children. In another case, the hospital changed a pro-union worker’s shift, knowing it would force her to give up her second job, the judge found.

“Queen of the Valley should be ashamed of how it has treated its employees,” Patient Access Representative Gabriela Caro said. “The hospital has enough trouble keeping quality workers, it shouldn’t be making it harder for good people to stay here and do their jobs. We expected far more humane treatment from a Catholic hospital.”

The National Labor Relations Board filed charges against Queen of the Valley last year for its conduct in connection with our 2016 election.

After initially working with us, the hospital abruptly withdrew recognition, claiming that the labor board erred in conducting the election by mail rather than inside the hospital. Since last March, the hospital has refused to honor its agreements with NUHW, provide workers with union representation, or bargain a contract unless we agreed that the contract could be voided if the hospital succeeded in overturning the election.

“The gravity of violations (the hospital) committed are serious, as (it) withdrew recognition and abandoned agreements with the union,” Judge Levinson Steckler wrote in a decision. She added that the hospital “deprived the represented employees and the union over a year of good faith bargaining.”

The judge gave Queen of the Valley two weeks to implement her ruling.