The event, co-sponsored by Labor Notes and PM Press, is part of the “Shaping SF Public Talk” series and will include discussion of new workers’ movements in the United States and abroad, including NUHW.

Steve Early is a former organizer and author of Save Our Unions and The Civil Wars in U.S. Labor about the rise of NUHW, and a contributor to Continental Crucible: Big Business, Workers and Unions in the Transformation of North America.

Manny Ness is a professor of political science at Brooklyn College/CUNY and author of New Forms of Worker Organization. 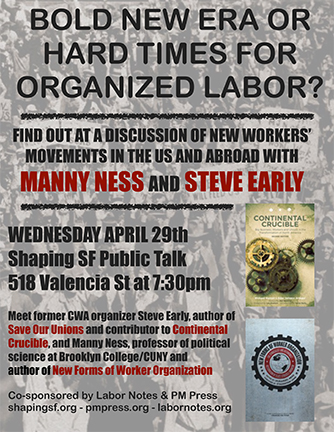